A YouTube channel was taken down after refusing to pay a $1,000 ransom

A series of fraudulent copyright claims against a YouTube channel shows how badly the platform’s DMCA takedown system needs a major makeover.

Last week, the channel SRbros Entertainment was taken down after another channel, ZM Production, issued three copyright takedowns against it. If a channel receives three strikes against it for copyright claims, it’s disabled.

ZM Production didn’t just want the videos taken down, however. It wanted to be paid $1,000 to leave the videos alone. The creators refused. 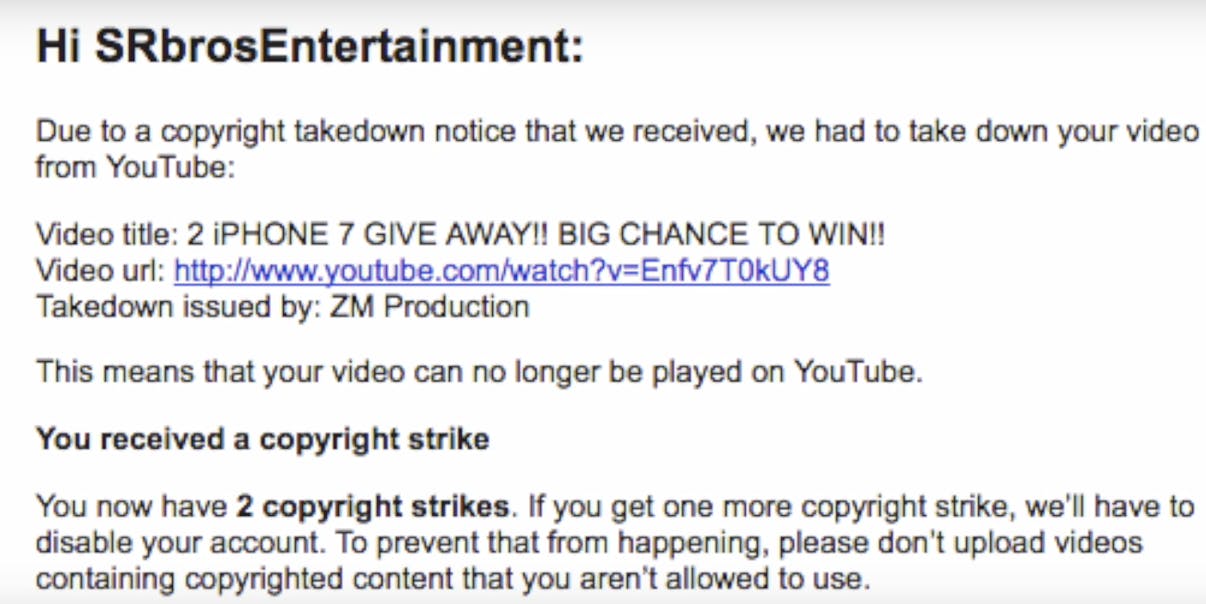 The channel—which is made up of brothers Shukran and Roshan—claims it never used ZM’s material illegally. In an email shown in the clip, a rep from ZM Production claims someone else was using their name to level the strikes, and that the channel had been inactive until recently.

The brothers reached out to YouTube for help earlier this month, and the platform said it would look into it, but the channel still received three strikes. Over the weekend their old channel was finally reinstated, but they claimed that since they’re a smaller channel, YouTube might have been less interested in helping them than a channel with, say, over 1 million subscribers.

Shukran and Roshan have been attempting to grow their channel over the last four years and had more than 100,000 subscribers, which they lost.

On Saturday, the brothers posted a humorous video about the whole situation to their new channel and also pointed out that someone is uploading videos to the SRbrosEntertainment channel, which is now somehow verified—something they’d been trying to get for the channel.

Fraudulent or frivolous copyright claims have been a major issue on YouTube, and the fact that these claims now involve identify theft and bribes does not bode well for the platform or its creators. The popular channel h3h3Productions helped launch FUPA earlier this year to assist creators who’ve been the target of copyright trolls. And YouTube vowed last year to help creators caught up in fair-use battles.