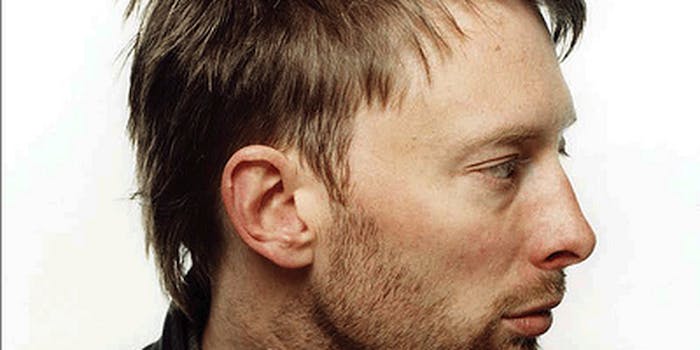 Yorke pulled all of his solo material and his new Atoms for Peace album from the streaming music site.

Between his lyrics, interviews, and independent distribution models, it’s hardly a secret that Radiohead frontman Thom Yorke is no fan of late-stage capitalism. The latest target of his disgust is the streaming music service Spotify, from which he has removed a substantial amount of his work.

The news came through a tweet from producer Nigel Godrich, a frequent collaborator sometimes referred to as the “sixth member” of Radiohead. Godrich is also in the Yorke-fronted band Atoms For Peace.

Anyway. Here’s one. We’re off of spotify.. Can’t do that no more man.. Small meaningless rebellion.

Yorke retweeted this and several of Godrich’s follow-up comments as all of his solo music and Atoms For Peace tracks disappeared from Spotify. He eventually offered his own take:

The reason is that new artists get paid fuck all with this model.. It’s an equation that just doesn’t work

Make no mistake new artists you discover on #Spotify will no get paid. meanwhile shareholders will shortly being rolling in it. Simples.

for me In Rainbows was a statement of trust .people still value new music ..that’s all we’d like from Spotify. don’t make us the target.

It’s true, by the way, that artists get a fraction of a penny for every track played on Spotify.

How meaningless a rebellion this is remains to be seen. Spotify has added plenty of “classic” content this year, from Pink Floyd to the Eagles catalogue, but Yorke and Godrich may have considerable influence in the matter of how emerging bands choose to reach listeners.

Spotify responded to Yorke’s actions with a familiar line: “Right now we’re still in the early stages of a long-term project that’s already having a hugely positive effect on artists and new music.”

Meanwhile, you can still stream any Radiohead song you like. We suggest “Dollars & Cents.”