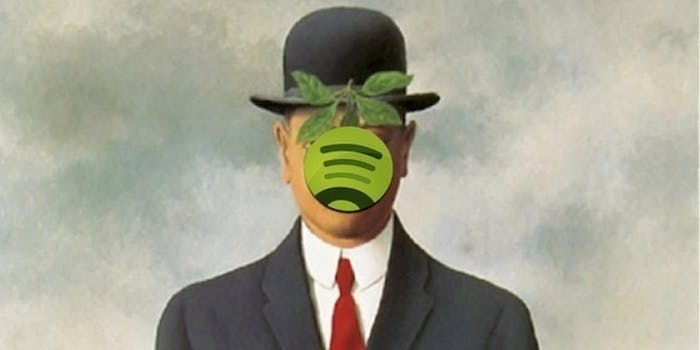 The nameless artists of Spotify

Some artists on Spotify aren’t going to see either penny from my many repeated streamings.

If you’re a recording artist, you aren’t relying on Spotify to pay your bills—even the most generous estimates have Spotify paying less than 2 cents per premium play. But some artists on Spotify aren’t going to see either penny from my many repeated streamings. They’re the unknown voices and instrumentalists, found mostly on accident, whose identies lost to history, but just like the painters of sarcophagi in Egypt, their artistry remains.

Thanks to the giant music library’s sorting options, deep in the recesses of Spotify you can uncover songs attributed to noteworthy artists such as Male Singer*, and bands you know that you’ve heard many times before, like, Anonymous Jazz Band.

Granted, in a lot of these cases, even if Spotify knew their names, the artists wouldn’t be getting paid, due to the difficulties that the deceased have cashing checks. But as someone who listens to a lot of dead artists anyway, I still wonder whose talents I’m enjoying. How did they end up on there without an identity? Especially someone capable of such a breathy and sultry performance as Unidentified Female Singer. Equally mysterious is the northern man who asks her what other songs she knows at the end of the track.

First off, I guess it’s important to remember that this emphasis we place on the performer of a particular song isn’t universal. In a way, it’s a product both of recorded music itself and on the type of music that we think of as normative. Some music isn’t really for sitting down and watching, it’s for participating in, and its lifespan need not be longer than its performance.

Religious music isn’t an end in and of itself, it’s pointing you somewhere. As much as I want to know more about this “Catholic Jew from Spain,” singing the Pentateuch in Jerusalem in March 1913. His name was maybe lost when the wax cylinder of his song was first made a century ago, but it was definitely gone by the time that wax cylinder made it to a record, and eventually onto Spotify. This relic has no author, only someone to uncover it.

*Thanks to the eccentricites of of Sporify’s embed code, the names of these artists do not appear in the embedded track boxes.