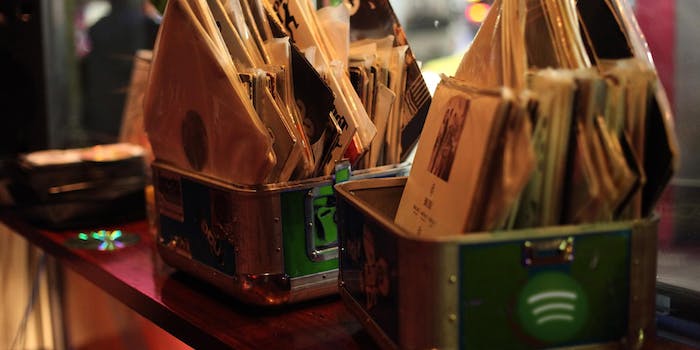 11 albums missing from Spotify—and 5 that aren’t

Finding albums on Spotify is sort of a game of Whac-A-Mole.

You’ve likely had that moment of panic while searching Spotify: the album you want to listen to right now isn’t there. You fall into an abyss of despair. You end up listening to Jawbreaker’s Dear You because you’re in a vulnerable place.

Finding albums on Spotify is sort of a game of Whac-A-Mole. A recent search for Bikini Kill albums yielded only songs from compilations, which might have something to do with the fact that the band started a label in order to release their back catalog earlier this year. Perhaps those albums will never see Spotify.

I asked my Daily Dot coworkers about the glaring omissions on Spotify and received passionate emails pleading for a wealth of works to be represented: Rammstein, Boris’s Pink, Bollywood soundtracks, Def Leppard’s Hysteria, the Friday soundtrack, Bob Seger, Silver Jews, and, of course, the Beatles. (If the disappearance of the iPod has you nostalgic, here’s a Spotify playlist of early Aughts songs. Train’s Drops of Jupiter is very much available.)

Of course, bands actively avoid Spotify: The Black Keys withheld their most recent album, and you won’t see Beyoncé’s latest effort there, or Coldplay’s. Some acts have attempted to circumvent the business model—most notably trio Vulfpeck, who released an album of complete silence on Spotify earlier this year, in an effort to pay for a tour. Spotify later removed the album, but only after the band reportedly made about $20,000 from streams.

If an album isn’t on Spotify, it’s likely wandering a maze of rights issues; the process of getting an album on the site is often complicated. Graham James, the self-described “communication guy” for Spotify, explained:

“In order to have music on Spotify, we need to have agreements with the rights holders—that usually means the label and the publisher and in some cases the artists. The issues are unique to each artist and title when it comes to where these are made available.”

Which is why some albums might never end up on Spotify, like the Beatles’ catalog, and, alternately, some previously unavailable albums magically appear after an absence. One notable missing album is Dr. Dre’s The Chronic, which was removed from iTunes in 2011. James says the reason “is an issue between the artist and the label that dates back years. It’s now stuck in a legal limbo.” Surprisingly, another notoriously litigious artist on the wanted list, Prince, currently has a healthy selection of albums on Spotify, with Diamonds and Pearls and Lovesexy as two glaring omissions.

Here’s a list of some of the albums currently in Spotify limbo, ones that, if Spotify is anything like a vision board, might materialize simply because we put the idea into the universe.

I was actually surprised to find any Dead Kennedys albums on Spotify, though the albums represented only offer partial tracks. This 1980 album—the group’s debut—is their masterpiece, and a nice bookmark in punk’s political history.

We’ve lost track of how many mixtapes Lil B actually has now, so it’d be nice to have them all in one place. Spotify is also doing video ads soon, and Lil B would be perfect for a spot.

Kate Bush is having a moment: Her 22-date London comeback tour—her first live performances in 35 years—sold out in less than 15 minutes, and she recently became the first woman to have eight albums on the top 40 charts at the same time. One of those album is Bush’s 1985 LP, Hounds of Love, which is sorely missing from Spotify.

U.K. electronic group Cabaret Voltaire’s catalog is kind of a mess on Spotify, but this compilation houses all the “hits” you need from the group.

The band’s 1978 album, Chairs Missing, is available, and it’s a fine one, but Pink Flag remains the lynchpin.

Steve Albini actually had positive things to say about streaming, in terms of bands getting exposure, but not so much for artists. None of his projects are on Spotify, but perhaps that’s keeping the universe in balance.

Bikini Kill might have the same view as Albini when it comes to artists making money on streaming sites. Their albums were apparently on Spotify under the Kill Rock Stars label at one point, though there’s no word if they’ll be back now that they’ve started Bikini Kill Records to release their catalog.

U.K. trio This Heat only released two proper studio albums, but their 1979 debut self-titled is the monolith.

9) King Crimson, In the Court of the Crimson King

This 1969 album features “21st Century Schizoid Man,” which was sampled by Kanye West for one of the most perfect cultural transactions ever. Though King Crimson does not exist on Spotify, guitarist Robert Fripp did just debut a King Crimson-focused YouTube channel.

Her 1996 follow-up to 1994 debut Age Ain’t Nothing But a Number (which is on Spotify) will make you nostalgic for the Missy Elliott/Timbaland era. Now that a Lifetime movie about Aaliyah is being floated around, it’s apparent a whole new generation is unfamiliar, and that’s a crime.

This 2007 album was on several people’s lists of demands, which is ironic because it’s become the success story for circumventing sites like Spotify. Frontman Thom Yorke also famously described Spotify as the “last desperate fart of a dying corpse.” Burn.

That said, at the time this article published, there were no fewer than five versions of the full album ripped to YouTube. So there’s that.

As a bonus, here are five lesser-known albums that are on Spotify, which you should listen to posthaste:

1) Au Pairs, Stepping Out of Line

U.K. punk band Au Pairs are perhaps the best part of Urgh! A Music War. They didn’t shy away from issues of sex, pleasure, and feminism, as heard on “Come Again” and “Set-Up,” from their first album, Playing With a Different Sex. This anthology shows the scope of work between 1978-1983, during which they only released two albums.

A coworker pointed out that The World of Arthur Russell, the late composer’s collection of dance tracks, is sadly missing from Spotify, but this collection of instrumentals is there in its stead.

This 1974 album was recorded during Lennon and Nilsson’s infamous “lost weekend,” and you can hear Nilsson’s voice getting shredded. But there are some truly beautiful moments from this creative partnership, including this cover.

The wealth of styles contained in this 1980 album is astounding, and Swell Maps’ sound has never been duplicated. Check out frontman Nikki Sudden’s other project, Jacobites, as well.

ZE Records reissued French singer Descloux’s albums in 2006, which was a goldmine for fans. Mambo Nassau might be her best album, but the Press Color collection highlights her post-punk output with Rosa Vertov.