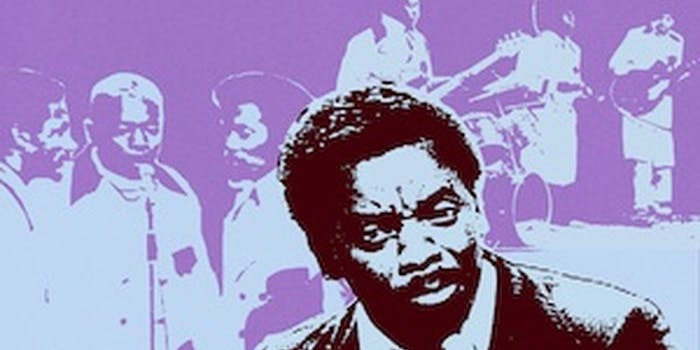 Speak to Me: Texas Heat and Southern Soul

In Spotify Essentials, the Daily Dot curates custom playlists created by some of our favorite artists, staff writers, and Web community leaders. In this installment, former Black Joe Lewis & the Honeybears bandleader and guitarist Zach Ernst recounts the rhythm and blues that’s shaped his career.

I moved to Austin in 2004, and my first semester at the University of Texas I enrolled in a class called “Blues According to Clifford Antone.” As an aspiring teenage guitar slinger I had heard about his club, a legendary venue where countless R&B legends had played and a young Stevie Ray Vaughan had cut his teeth. Hearing Clifford talk about music and the colorful characters that graced the stage of his club sparked an obsession with blues and soul music that I probably will never be able to kick.

Ray Sharpe is best known for writing “Linda Lu,” a blues standard covered by the Rolling Stones, the Flying Burrito Brothers, and Tom Jones. Born in Fort Worth in 1938, Sharpe wrote and recorded a number of memorable Chuck Berry-style rock & roll tunes like this one in the late 1950s. A young Jimi Hendrix played on sessions he cut with fellow Fort Worth native King Curtis in 1966. I’ve been trying to get him down to Austin to do a gig for about a year, but have been so far unsuccessful.

Originally recorded by L’il Millet and his Creoles in 1955, this swampy tune was recently covered by Robert Plant and Alison Krauss on their album Raising Sand. Jimmie Vaughan’s band the Fabulous Thunderbirds included this version on their 1977 debut. Mike Buck, the drummer on the first two T-Birds albums, is now the coowner of Antone’s Record Shop in Austin. He plays a couple nights a week in several great bands with his wife Eve Monsees.

The Relatives are a gospel group formed in Dallas in 1970 by Rev. Gean West and his younger brother Tommie. The band combined gospel harmonies with funk and psychedelia to produce a sound reminiscent of Sly & the Family Stone and the Temptations. After being discovered by the owners of Austin label Heavy Light Records in 2010, the Relatives reunited and started playing live again. I caught their second show back and was absolutely blown away. Over the past several years, I have worked my way into the band, playing guitar with the band in France, New York City, and Australia. No one can get the crowd moving like guys used to turning out a church.

Little Joe Washington is a staple of the Houston blues scene. He first recorded there in the 1950s and today holds a residency at the local Continental Club. With his diminutive stature and ragged appearance, one would not believe what a sophisticated guitarist and explosive showman he is. I learned about Little Joe from Black Joe Lewis, who covered one of his tunes on his first album. I brought Little Joe over to Austin last summer to open for Barrence Whitfield and the Savages at the Continental Club. During the last song he removed his hat and leapt from the front of the stage, collecting tips from the bulk of the audience on his way out the front door. (I’m confident he made more that night than anyone.)

Another find by the team at Heavy Light Records, Kool & Together were a band of teenagers from Victoria, Texas. The relentlessly funky “I Know” was recorded at a session in Houston with Huey Meaux, the legendary producer responsible for producing Sir Douglas Quintet’s “She’s About A Mover” and Freddy Fender’s “Before the Next Teardrop Falls.” I was lucky enough to sit in on the band’s rehearsals when they were gearing up for their first comeback show last year. Local producer and Spoon drummer Jim Eno sat in on percussion, and I played rhythm guitar on a few songs when the big night came around.

“The Texas Cannonball” Freddie King gained legions of new fans when his version of “I’m Going Down” was chosen to be the theme for HBO’s Eastbound and Down. In the 1960s, he was idolized for his instrumentals, most notably “Hide Away” (Eric Clapton cut his version of that tune on the first John Mayall & the Bluesbreakers album in 1966). This version of “Stumble” features rhythm guitar work from Fort Worth session whiz Cornell Dupree.

Cornell played on over 2,500 sessions for Aretha Franklin and other artists throughout his illustrious career, and he recorded his final album in Austin. In exchange for tuning his guitar and setting up his pedals, I was able to sit in on the sessions and watch the master at work.

“You Can’t Be Satisfied”

Widely renowned for her Billboard Top 10 hit “You’ll Lose A Good Thing” and its followup “Oh Baby (We Got A Good Thing Going),” Barbara Lynn is widely regarded as one of Texas’ finest soul artists. Clifford Antone counted her on his list of absolute favorite vocalists, and she’s one of the tastiest, funkiest guitar players to ever pick up an axe. She shines most on ballads like this one, an obscure cut that highlights her heartfelt vocals and smooth guitar leads. My girlfriend and I once picked up Barbara at the Odessa airport and drove her to a gig in Marfa: Those few hours were some of the most memorable of my life. Stopping at a Dairy Queen in Alpine with my guitar hero was nothing short of surreal.

“I Wouldn’t Treat A Dog (The Way You Treated Me)”

Although born in Tennessee, Bobby “Blue” Bland will always be known for the work he did in Texas: The seminal R&B recordings he made in Houston with Don Robey for Duke Records in the late ‘50s and early ‘60s rival Ray Charles’ best work. He continued releasing quality LPs for several decades to come. 1974’s Dreamer includes this track as well as “Ain’t No Love in the Heart of the City,” which was sampled by Jay-Z. I’ve seen him live several times, the best of which was at a tiny, now defunct club in Austin called Momo’s. Some of his older female fans (all wearing their Sunday best) packed to the front of the stage, whooping and hollering every time Bobby let out his signature squall.