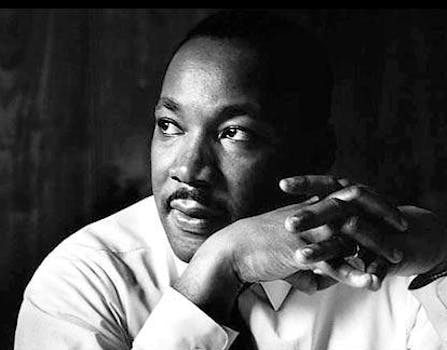 Soundtrack to a dream: A Spotify tribute to Dr. King

As this playlist attests, Martin Luther King inspired a great collection of musicians to rise up and preach the virtues that he'd offered as gospel throughout his short life.

Anger, pain, hope, aggression. If Martin Luther King, Jr. had any effect on American music, it’s that he forced it to react. The artform couldn’t sit still on the topic of the fallen civil rights leader. It had to do something.

A great deal of the music that came in the wake of Dr. Martin Luther King’s death has been the type that would fall under the umbrella of hope and optimism. There’s Bob Dylan’s “When My Ship Comes In,” which envisions a time when “the sun will respect every face on the deck,” and Sly & the Family Stone’s “Everyday People.”

There’s Elvis Presley’s “If I Can Dream” and Bobby Womack’s “American Dream,” which samples the preacher; a live rendition of the timeless “We Shall Overcome” and the Game’s proud “Letter to the King,” a collaboration with Nas rapped 40 years after King’s death.

Martin Luther King inspired a great collection of musicians to rise up and preach the virtues that he’d offered as gospel throughout his short life, but the emotions that derived from his death weren’t so simple. His April 1968 assassination also brought forth an immense sense of anger, a sentiment that bleeds through every heated note contained within Nina Simone’s fiery “Mississippi Goddam.”

Later, after the people of Arizona voted down a proposal to create a state holiday for King in 1990, Public Enemy carried that anger into “By the Time I Get to Arizona.” The battle was hardly about respect anymore—that was supposed to be over. Chuck D was out to put Arizona in its place.

You can hear hints of that same sentiment in the “All my life I been searching for money and power” message that emanates throughout Kendrick Lamar’s “Backseat Freestyle.”

Equality is power. Dr. King knew that all along.