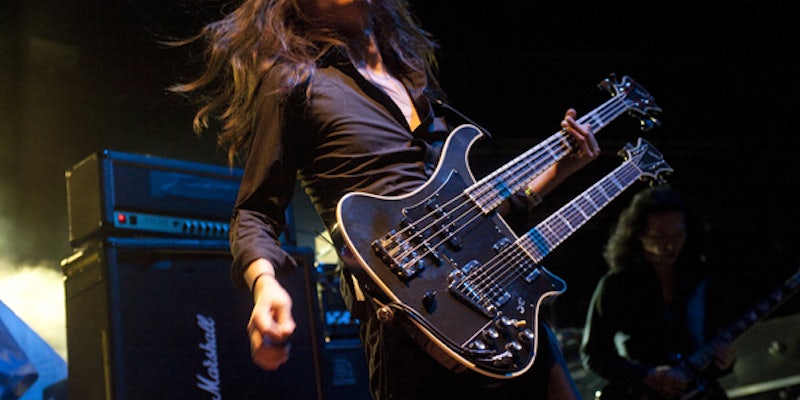 Here's your guide to the most important Japanese band of the past decade.

Leave it to Boris to tour behind an import-only album, self-released more than a decade ago.

The most important indie rock band that you’ve likely never heard, Boris has never been one for conventionality.

Billed “from the past, the present and through to the future,” the Japanese iconoclasts are performing 2000’s Flood—a climactic, 70-minute post-rock suite—in its entirety for the opening night of their current U.S. tour, followed by a career retrospective.

It’s actually the concept of the second evening that I have a harder time wrapping my head around. Since forming at Tokyo’s Musashino Art University in 1992, Boris has defied categorization, along with anything even remotely resembling a “hit.” The band exists in a state of constant transition, as if determined to push the boundaries of rock music in all directions, with the distinction between albums at times as drastic as Radiohead from OK Computer to Kid A.

In the simplest of terms, Boris is the penultimate power trio, capable of the amphetamine rush of Motörhead, Earth’s slow-as-molasses drone, and the cinematic triumph of Explosions in the Sky, often times in a single number. Petite guitarist Wata doesn’t shred—she cleaves, operating an E-bow like a laser beam. Takeshi’s dual guitar/bass riffs shift like tectonic plates while drummer Atsuo powers the operation, intuitive but commanding.

“There’s something really interesting in their embracing of so many forms of music,” director Jim Jarmusch, who spotlighted the band on soundtrack to The Limits of Control, told me. “They play like jazz musicians in that they’re listening and reacting to what they’re building. It’s so transporting, like landscapes they take you through.”

Building a Spotify retrospective for Boris, presumably like culling a set list for the tour, is no easy feat. For starters, a significant amount of band’s catalog, from Flood to 1996 debut Absolutego, isn’t available for streaming. Vinyl pressings tend to error on the side of limited edition, especially for the imports, and the group tends to release multiple versions of the same album, with alternate track listings, bonus material, and serious discrepancies between the Japanese and stateside versions. The Japanese version of Smile, for example, is actually an alternate version produced and mixed White Heaven’s You Ishihara. (Neither release is available on Spotify.)

“In a lot of ways, some of this material is not meant to be readily available,” Greg Anderson of SunnO))) and Southern Lord Records noted. “Boris looks at music almost as art projects. They need to create and get things out of their system so they can move on to the next idea.”

Even still, there’s enough material on Spotify to cull a beginner’s guide to Boris’s merch booth.

This playlist opens with exit music, the celestial “Farewell” from 2006 critical breakthrough Pink, and closes with “Feedbacker,” a live, 35-minute perfect storm of eerie suspense—the pelts of white noise from longtime collaborator Merzbow crackling in the distance first, then circling closer, until it’s hailing on windshields. Denting.

In the nearly two hours in between, there’s the full arc of Boris’s trajectory: maximum psych-blues of Akuma No Uta (“Ibitsu”), the cackling ambiance of Cosmos, and the band’s more recent J-pop explorations (“Black Original”). There’s “Afterburner,” which sounds like a John Lee Hooker 45 at half speed and played backwards, and “The Sinking Belle (Blue Sheep),” a fatal hymn with SunnO))) and Jesse Skyes.

It’s a study in extremes: abrasive yet beautiful, blown-out but understated—and despite the distinct language barrier, none of it gets lost in translation.

“Translation is only a tool for the listener to picture the music,” Atsuo once told me. “Ultimately, we try to make music that lets people discover something new no matter how many times they listen to it. We aren’t expecting listeners to understand our music. We just want to create an experience for them.”