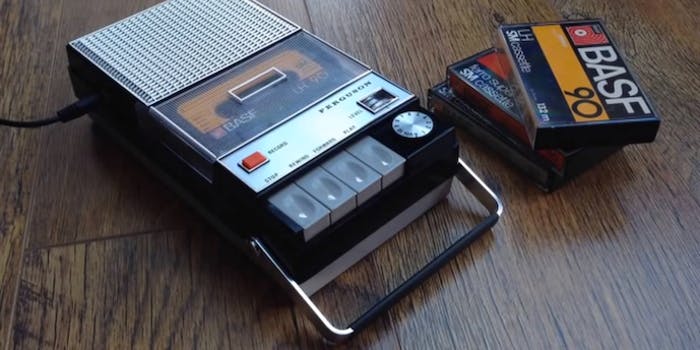 Some genius rebuilt a cassette player to stream Spotify

But will it play my old PM Dawn cassettes?

Spotify is a convenient means of streaming music, but sometimes you long to reach out and… touch something. To caress edges and push buttons. That’s where Matt Brailsford comes in.

The U.K.-based developer used computing system Raspberry Pi to connect Spotify to a tactile, old-school cassette player. The guts of a the player were removed, and the Raspberry Pi transplanted in. The Raspberry Pi runs a version of Music Box with Spotify streaming features loaded; a custom module reads button presses, reads NFC tags inside the cassettes, and identifies playlists.

Brailsford admits he needs to come up with a good name for the contraption. Right now, he’s just calling it Ferguson, which is its manufactured birth name.

Brailsford currently works as a Web developer, but still finds time to “tinker in my spare time to pull myself back into the real world and work on real things, not just stuff in the virtual world. There is just something about something you can hold in your hands that is way more satisfying than any piece of code you create.”

Indeed, there is something soothing about hearing an older song, or even a new song, hiss through those cassette speakers.

“I was a child of the ‘80s so these were the types of devices I grew up with and loved,” Brailsford said. “Everything back then just felt more solid and built to last, unlike much of today’s tech that is made to just last a year or so at most. Many devices also have a kind of beauty that is difficult to just throw away, so really it was just a case of giving these types of things new life and making them useful again.”

Brailsford says he’s always been interested in the guts of things, and was “always been a bit of a (frustrated) tinkerer. After I’d had my fun with any electric toys, I’d always end up pulling them to pieces to see how they work. Maybe that’s why I have the respect I do for the products of my childhood and want to bring them back to life.

“In the end, though, it’s just nice to have that tactile feeling back in your fingertips where you physically have to change the cassette to change the playlist, rather than everything being controlled by tiny little screens in your pocket.”