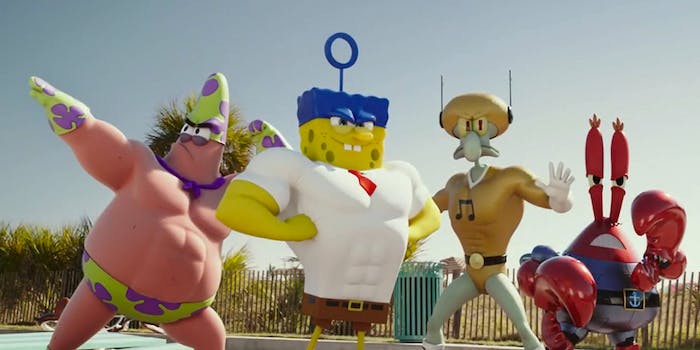 Get ready to see SpongeBob SquarePants in 3D

Remember when the first episode of SpongeBob premiered after the Kid’s Choice Awards in 1999? Well, we’ve come a long way since then.

Nickelodeon and Paramount Animation just released the trailer for the new SpongeBob movie The SpongeBob Movie: Sponge Out of Water 3D.

Coming sometime in 2015, the trailer shows SpongeBob and friends having to leave world of Bikini Bottom and step into the non-marine world of man. Back in 2004, The SpongeBob SquarePants Movie had SpongeBob and Patrick in their animated 2D versions team up with David Hasselhoff. This time around, SpongeBob and crew will be fully rendered in 3D.

Sponge out of Water 3D could be seen as a way to reinvigorate the franchise 15 years after its initial debut. There was a scare in 2012 that SpongeBob’s ratings were starting to dip among the 2-11 age group. But it seems Nickelodeon was able to turn things around. During the second quarter of 2014, SpongeBob ranked as the highest kids television show.

Fans have complained of the general decline in quality after series creator Stephen Hillenburg left the show in 2004. Hillenburg had planned on ending SpongeBob after the first film had released, but Nickelodeon insisted on keeping the popular show in production. As of 2009, merchandising revenue alone valued SpongeBob at $8 billion.