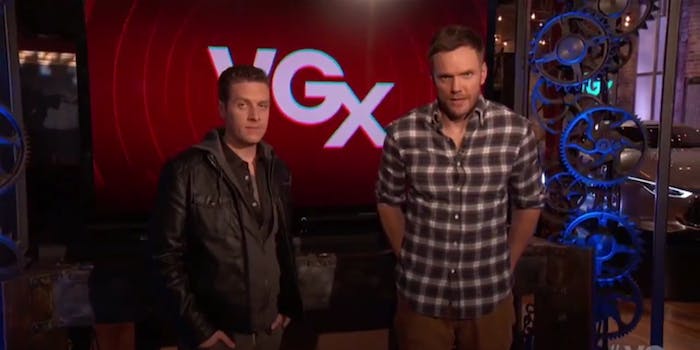 And the award for weirdest gaming awards show goes to…

The awards were inexplicably hosted by Joel McHale.

Last month’s inaugural YouTube Music Awards were chaotic and broke the fourth, fifth, and sixth walls. It had a few WTF? moments, mainly because there was a lot going on, but it also redefined what an awards show can be. That show seemed like a professional venture compared to what happened during Spike TV’s VGX Awards.

The Saturday evening gaming awards, which previously went simply by “VGA,” were hosted, inexplicably, by Community’s Joel McHale. Those hoping the format might follow that of his much-loved The Soup were likely… perplexed.

“It’s hard to believe that just four short hours ago, my wife had to awaken me from a booze and pill-induced haze to remind me that I thought it was an awesome idea to host a live nerd thing,” McHale said.

Here are some of the most cringeworthy moments.

This year, the folks at Spike wanted to change the tone of the show a bit. The show was streamed online instead of  television. They tried to focus more on the gamers than celebrity presenters. They added the “VGX.” There was no studio audience.

The inclusion of McHale could have added some levity; he’s good at smart-aleck comments, and could have given this “nerd thing” some needed punch. But instead he took every shot he could at the gaming community, and made it clear he didn’t want to be there, which only added to the formlessness of the show. Seems like Spike still has some fine-tuning to do.