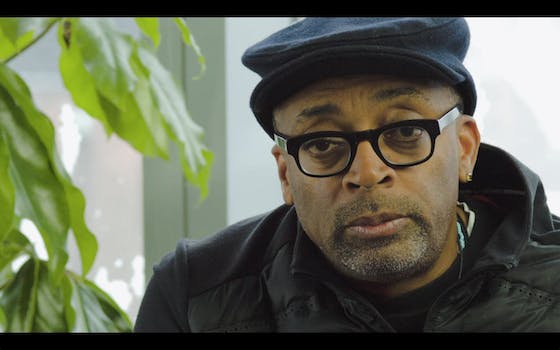 "This is the future of film distribution. Please join us."

Remember when Spike Lee launched that $1.25 million Kickstarter crowdfunding campaign way back in July 2013 for an as-of-that-time unnamed new and hot joint with the tagline, “Human beings who are addicted to Blood. Funny, Sexy and Bloody. A new kind of love story (and not a remake of Blacula).”?

Remember all the heated debates it sparked about whether or not it was kosher for multi-millionaires from traditional Hollywood to try to leverage their audiences and newfound funding mechanisms to make potentially risque projects outside the familiar, but sometimes unfriendly confines of the traditional entertainment landscape?

And remember how Lee ended up raising more than $1.4 million for the campaign, with at least $290,000 of that sum coming from 29 individuals who put up $10K a piece to go out to dinner with the Academy Award-nominated director and sit courtside with him at a Knicks game?

Well, the crowdfunded flick has now been released. And it’s on Vimeo On Demand before it’s in theaters.

Da Sweet Blood Of Jesus dropped on the video-sharing website’s pay-to-rent-and-own platform on January 13, 2014, where it’s currently available for a $9.99 24-hour streaming rental or a $14.99 digital download.

“I’m hyped on my partnership with Vimeo to get my new joint ‘Da Sweet Blood of Jesus’ out to the world in a new way,” Lee said in the release. “This is the future of film distribution. Please join us.”

Gravitas Ventures acquired the North American distribution rights to Lee’s over-the-top horror film back in November 2014. At that time the distributor let loose its plans to release the movie theatrically on February 13, 2015 (just in times for Valentine’s Day!) and on-demand. But there was no indication the on-demand release would pre-empt Da Sweet Blood Of Jesus‘ big screen debut.

“Spike Lee is one of the most iconic filmmakers of our time and we couldn’t be more thrilled to work with him on this unprecedented release,” said Vimeo Audience Networks General Manager Greg Clayman, in the release. “We are huge fans of Spike and were drawn to the film’s independent spirit. Having built an audience and raised over a million dollars on Kickstarter, we are beyond excited to bring the film to fans directly one month ahead of the theatrical release.”

Da Sweet Blood Of Jesus is inspired by Bill Gunn’s cult horror classic Ganja & Hess. The sanguine story first screened at the 1973 Cannes Film Festival and obviously stuck with Lee, who first saw it as a New York University film student. Similar to its inspiration, Lee’s joint focuses on an unhealthy obsession for blood developed by an intellectual in the upper echelons of academia. Here’s the official synopsis:

When Dr. Hess Green (Stephen Tyrone Williams) is introduced to a mysteriously cursed artifact by an art curator, Lafayette Hightower (Elvis Nolasco), he is uncontrollably drawn into a newfound thirst for blood that overwhelms his soul. He, however, is not a vampire. Lafayette quickly succumbs to the ravenous nature of the infliction but leaves Hess a transformed man. Soon Lafayette’s wife, Ganja Hightower (Zaraah Abrahams), comes looking for her husband and becomes involved in a dangerous romance with Hess that questions the very nature of love, addiction, sex, and status in our seemingly sophisticated society.”

Lee filmed the “at times scene for scene and shot for shot” remake of Ganja & Hess in 16 days back in Fall 2013 in Brooklyn and Martha’s Vineyard with a cast of the aforementioned, relatively unknown actors. And here he is introducing it to the online video masses: