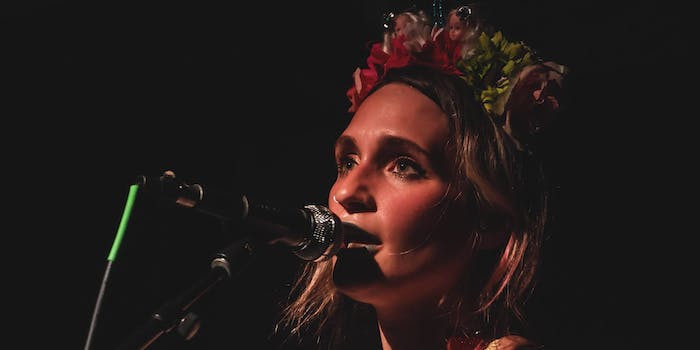 Speedy Ortiz calls out Consequence of Sound for sexist review

'Can we do better out of the gate when we write about humans?'

Breaking news: Women play rock music and sometimes they do it while dressing femininely.

Speedy Ortiz’s lead guitarist Sadie Dupuis took to social media Tuesday to air her frustration with a review of Forecastle Festival in Consequence of Sound, remarking that the review made it sound like listeners still need “proof” that women can play instruments in 2016.

love you @coslive but oh my god do we honestly still need "proof" that women can play instruments in 2016? pic.twitter.com/RW1SHAGPY7

anyway, last night of tour is tonight at @Chameleon_Club lancaster, I'll be wearing not-pants, A Hairstyle & mostly lacking in masculinity 🙃

In her original review, writer Amber Patrick wrote that Bully and Speedy Ortiz “proved that women can rock as hard or harder than their male counterparts.” Later in the review, Patrick called attention to Dupuis’ feminine attire.

“Though frontwoman Sadie Dupuis’ appearance could have easily allowed her to disappear in the crowd of fashionable festival-goers–with pink-tipped hair, a cropped top, and a vinyl skirt,” Patrick wrote, “her heavy shredding and saccharine voice would permanently embed her into the minds of her audience as the band ripped through ‘The Graduates’, ‘Ginger’, and ‘Dot X’.”

Dupuis did not take the comments as a compliment. She wrote in a Facebook post that she felt Patrick implied she and “fashionable” people belong in the crowd rather than onstage.

“You’re honestly telling me that rock performers like Death Cab for Cutie who dress masculine don’t look pretty identical to the male & masc festival goers,” Dupuis wrote. “If it seems counterintuitive that ‘masculine’ & ‘feminine’ interests–rock music & fashion, respectively, in this case–can coexist in one human body, that’s because the gendering of interests is a totally artificial and oppressive practice to begin with.”

After Dupuis expressed frustration on Twitter, CoS deputy editor Philip Cosores tweeted to Dupuis, letting her know they had edited out the controversial parts of the review.

The current version of the review leaves out any mention of how she blended in with the audience because she was dressed fashionably or how Speedy Ortiz and Bully represent how women can rock harder than men.

“I just saw it on Twitter—her initial tweets—and I immediately went in and re-edited the piece, because she’s right,” Cosores told the Daily Dot. “Everything she said on Facebook I think as a site we would agree with and that’s why we immediately changed it. We regret running it as it was, and we’ll try not to do it again in the future.”

At press time, the version of the review makes no note of these alterations, although Cosores said he is planning to issue a note about the correction within the article.

When asked what editors and writers can do to avoid sexism when writing about women musicians, Cosores had no comment.