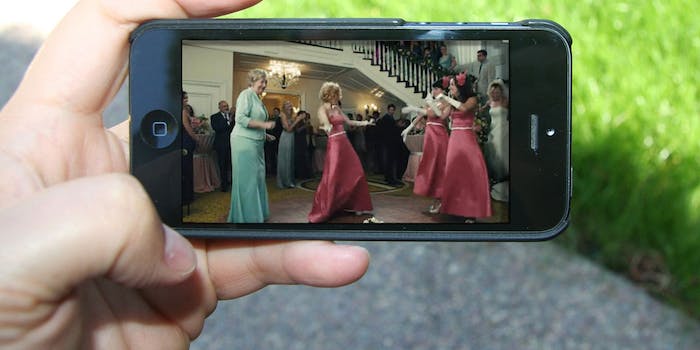 Southwest Airlines has a hit on its hands—in an Elaine Benes meets Wedding Crashers sort of way.

The airline’s newest commercial, a play on the ever-popular wedding season, features a traveling bridesmaid who takes advantage of Southwest’s low fares in order to fly to a number of weddings at which she makes her mark by busting out some funky dance steps to Young MC’s 1989 hit, “Bust a Move.” And for added giggles, she slow dances with a young man who attempts a not-so-subtle butt grab.

The star of these spots is comedian/actress Alice Wetterlund, known for  MTV’s Girl Code and a number of other TV ads. Armed with more than 86,000 Twitter followers, it would be difficult to avoid getting props from friends and fans on social media.

A prevalent social media theme is how much people dig Alice’s wild moves that are reminiscent of Elaine Benes’ bizarre “little kicks” from a memorable Seinfeld episode which prompted George Costanza to say, “Sweet fancy Moses,” wearing a look of horror. Wetterlund’s uninhibited flailing packs more charm and style than Elaine’s, though, and the comedian’s Twitter followers are in full support.

@alicewetterlund You’ve got the moves, chief.

The thing is that this is truly how @alicewetterlund dances at weddings, bless her https://t.co/Ks9q5Vurj5

Man, those are some sweet wedding moves. See what landed this dancer on @adage‘s Hot Spots: https://t.co/ta6fdojbxr pic.twitter.com/nFmifzrsqi

“@ALEVYWORLD: The chick in the southwest airlines wedding commercial go hard in the paint lol” Yes!!!

Throwing a large bucket of cold water on Southwest’s latest campaign, one Twitter commenter correctly pointed out that while the commercial is cute, the timing of the airline’s campaign is a bit off given most weddings take place in the summer with June being the dominant month.

Finally a funny @SouthwestAir commercial….only that wedding season is actually over.

Southwest Airlines is known for being the source of a number of YouTube classics, generally focused on its flight attendants’ offbeat and occasionally clever ways of doing their preflight safety checks. One of the more recent trends for Southwest is passengers (some famous, some not so) doing impromptu concerts during the flight. For that reason, when the seat belt sign goes off, smartphones with cameras come out. You never know when Mat Kearney will stand up and perform at 35,000 feet.