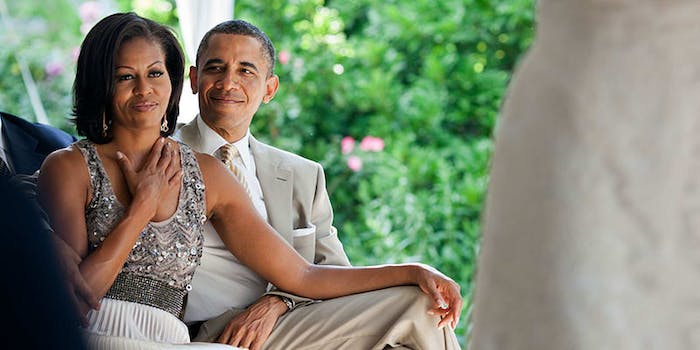 Barack Obama‘s job approval rating may be currently hovering near an all-time low of 43 percent, but his polling numbers are still looking great with Michelle—assuming the National Enquirer isn’t on to something.

Now the couple’s first date in 1989 will be immortalized in celluloid for an upcoming film called Southside With You, the Hollywood Reporter notes.

Written and directed by playwright Richard Tanne, who previously penned the story for the film Worst Friends, the movie will follow what happened after the future president, who was working as a summer associate at the Chicago law firm Sidley Austin, asked out his boss, Michelle Robinson.

The film looks to be in the vein of Richard Linklater’s Before Sunrise, the undisputed gold standard for first-date movies where things don’t go horribly wrong and end with the guy saving the world from an alien invasion.

Southside With You wouldn’t be the first movie drawn from a true-life road to the White House. The lead character in the weepy 1970 hit Love Story was partially based on a young Al Gore. Interestingly, the part of that character not inspired by Gore was modeled off of Gore’s college roommate at Harvard, actor Tommy Lee Jones.

As detailed in a 2012 campaign video, Barack and Michelle spent their first date walking around Chicago’s South Side, visiting the Art Institute of Chicago, and seeing Spike Lee’s Do The Right Thing.

“He showed all the sides—he was hip, cutting edge, cultural, sensitive,” said Michelle.