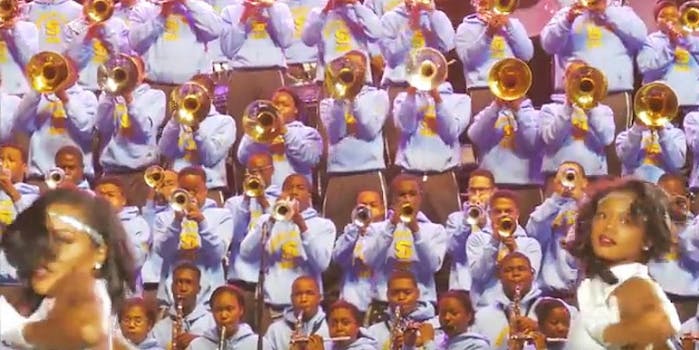 With Adele‘s “Hello” single and her surreal video propelling her album, 25, to towering heights ever since it was released, it’s hard not to go a day (or an hour) without hearing her soulfully sing about trying to stay in touch with herself.

But the singer can make toddlers smile and can gobsmack impersonators into the surprise of their lives. And she recently joined the Roots and Jimmy Fallon to play a version of her song using school instruments.

Now the Southern University marching band wants to introduce to you the most kickass version of the song so far. This is the song perhaps the best band in the country played during the Bayou Classic Battle of the Bands on Nov. 27.

Beware: When those horns come blasting in at the chorus, it is loud, loud, loud. But it’s ever so worth it.

If you’d like to watch more Southern University marching band performances—and, seriously, why wouldn’t you?—there are plenty of choices on YouTube.

H/T the Comeback | Screengrab via HBCUBANDS.com/YouTube