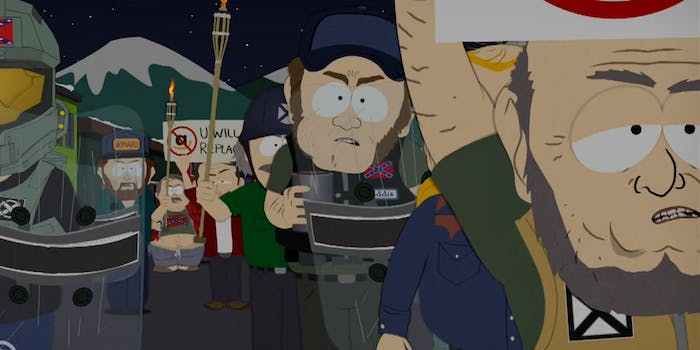 New season of ‘South Park’ to take on white supremacy

The series vowed to ignore Trump, but it didn't say it wouldn't get political.

After a troll-centric season 20, South Park‘s co-creator Trey Parker vowed to ignore Trump, but the series won’t be dropping the political thread.

In a new preview clip for season 21, the show addresses some of the events in Charlottesville, like angry white men carrying tiki torches and chanting, “You will not replace us,” as well as the debate over the Confederate flag.

The episode, titled “White People Renovating Houses,” debuts Sept. 13. Will Member Berries, the superfruit that allows you to be nostalgic for a more blatantly racist and homophobic time, be back?

Parker told the Hollywood Reporter: “Now that Spielberg is doing Ready Player One—which is, like, the most Member Berry thing ever invented—we can’t out-Member Berry that. All the Member Berries left our show to go be on that.”

Watch the season 21 premiere clip below: