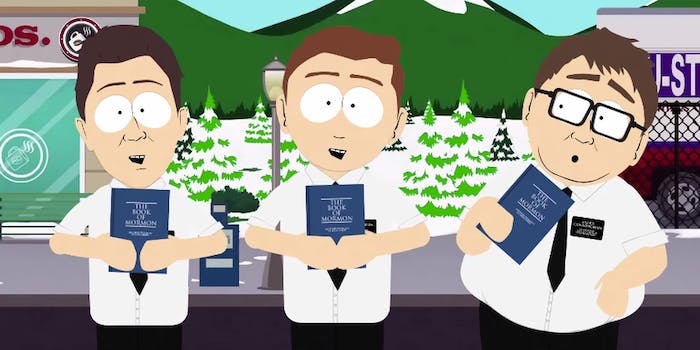 Say ‘Hello’ to this perfect ‘South Park’/’Book of Mormon’ mashup

Matt Stone and Trey Parker should hire this guy.

The Book of Mormon finally got its South Park due.

Both the musical and the series were created by Matt Stone and Trey Parker, but thanks to Simon Chong, we can now see the Mormon missionaries at work in the town of South Park, Colo., where their reception is pretty par for the course.

It’s a recreation of “Hello,” the show’s opening number, using the original cast recording. Chong’s work not only manages to capture much of the choreography from Book of Mormon, it gets the same aesthetics as South Park down to even the smallest of details and makes us wish for a musical sequel to South Park: Bigger, Longer & Uncut.

It may be just a fan video, but Stone and Parker should hire this guy.