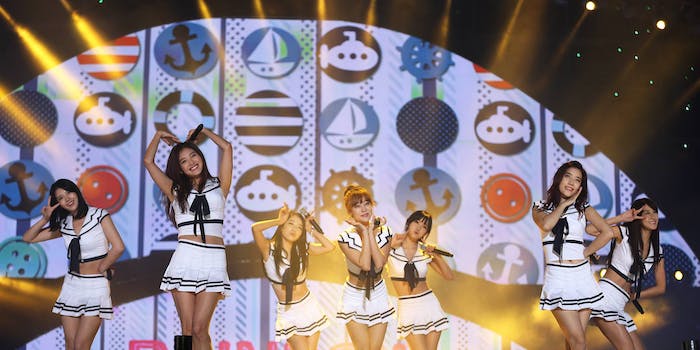 Photo via Republic of Korea/Flickr

It's the latest tactic in South Korea's psychological warfare.

North Korea’s latest nuclear tests have drawn harsh condemnation from much of the world, and South Korea is fighting back with sanctions—and music.

Yes, really. According to the Korea Times, South Korea plans to blast K-pop girl bands through its loudspeakers directed over the Demilitarized Zone (DMZ) and the North Korean border. It will also use an electronic display to show K-pop music as well as domestic and international news, and it’ll add four times the amount of loudspeakers.

The propaganda measures are designed to impact North Korean citizens who live near the border. It’s part of a larger psychological warfare tactic employed by South Korea.

And just having your song used by the South Korean government can be a sign of just how big a K-pop band has become.

“It’s amusing. Just the fact that it was used in such a place. Especially because the title is ‘Bang, Bang, Bang,'” Big Bang’s Tae-yang, who made a gun gesture when he named the song, told CNN last week about his band’s song being used previously.

It’s not the first time South Korea has blasted K-pop as a form of propaganda to annoy its neighbor and adversary to the north. It previously occurred in early January after North Korea conducted nuclear tests, and after K-pop music played on the loudspeakers last August, North Korea responded with a declaration that it was in a “quasi-state of war” and at one point threatened to shoot the speakers with artillery.