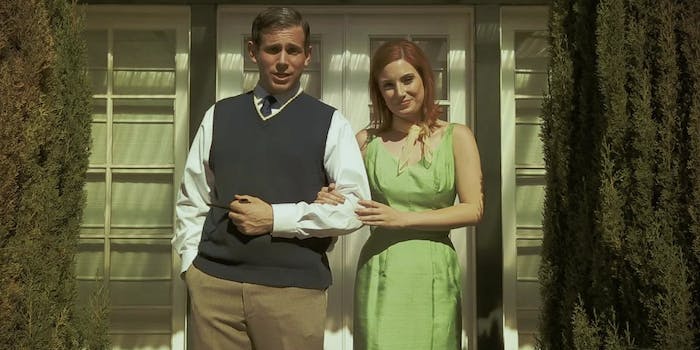 SourceFed’s new project, Nuclear Family, wants to up the ante for sketch comedy

Channel hopes to corner the market on Web satire.

In a sea of gameplay clips, challenges, and family vloggers, the gang from SourceFed is looking to break out as YouTube’s premier sketch comedy troupe with their new channel, Nuclear Family.

“You see [sketch comedy] on TV already, and it does really well,” explained Nuclear Family co-founder Bree Essrig. The idea behind Nuclear Family is “How can you see something on the Internet that’s different?”

Essrig is joined by fellow SourceFed talent Matt Lieberman and Steve Zaragoza on the project, as well as outsider talent, in developing weekly sketches for the Discovery Networks-backed channel. Jeremy Azevedo, head of Discovery Digital Networks LA, told the Daily Dot that while easier-to-produce vlog-style content crowds the marketplace now, he wanted to find a way to help the SourceFed team showcase their comedic strengths.

“The interesting thing about the SourceFed brand is they’ve got all these talented writers and performers,” he explained. “It’s difficult to find the incentive to put time and resources into making more complicated productions. But with the support of Discovery and the support of YouTube, it makes it easier to explore that.”

Longform and scripted content has been on the forefront of YouTube in recent months, with the launch of Red and the YouTube Originals initiative that will see YouTube-produced films and series available exclusively on the platform. The more sparse landscape in sketch comedy is, according to Azevedo, a plus for Nuclear Family’s prospects.

“There’s not a lot of competition,” he said “If you’re looking for that kind of content, you can count on one hand how many channels are really doing it at a high level. So that tells me there’s a need to fulfill.”

Nuclear Family has already stockpiled 18 sketches, and the channel will be releasing videos every Wednesday. So far, two are live: one parodying BuzzFeed’s “X Try Y For the FIrst Time” format with heroin as the gag, and a convention on Internet trolls that reveals their secret friendly nature. The channel is bolstered by a backlog of a handful of videos on the channel previously under Phil DeFranco’s ForHumanPeople brand. Azevedo says the tone of the sketch videos fit well under the overall SourceFed and Phil DeFranco umbrella of connected properties.

“Our audience is really smart and sophisticated,” he explained. “We’re talking about topics we know our audience is passionate about, because we run a news show every day, and we’re reaching out to new audiences by doing different types of content that they’ve never seen us do before.”

Having that established audience gives Nuclear Family the leeway to jump into more controversial topics.

“We can move a little faster and be more reactive,” said Azevedo. “They kind of dip their toe into some pretty hot social issues and find the comedy in the way people talk to each other online [about] all kinds of topics you may be afraid to talk about.”

Essrig said they’re not worried about backlash or controversy delving into issues like gun control or vaccination in the highly combative waters of YouTube.

“As long as you’re making the type of comedy that you personally like to consume, I don’t think you necessarily have to worry—especially when you’re making satire,” she said. “I think a younger audience is really craving that now.”