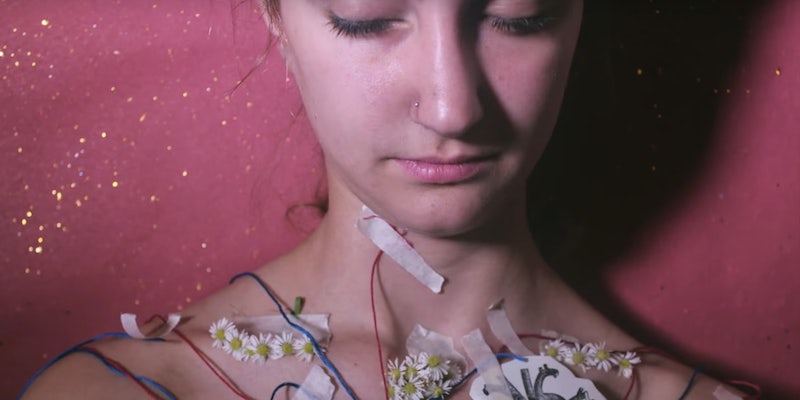 The teen YouTuber partnered with SoulPancake to share her vision.

Her soothing voice narrates a series of images drawn on her own back. Like magic, strings appear, fluttering over her neck. She reads a letter to her own imaginary daughter that serves as an inspiration to the thousands of young women already tuned in to her YouTube.

You’ve entered the world of 13-year-old Sonia Mandeville, who was born and raised in Indonesia and shares the intricacies of her life over YouTube as a way to connect with artists around the globe.

“At times I may feel disconnected to filmmakers in other countries, but YouTube allows me to connect to other creators despite the oceans separating us,” she wrote over email to the Daily Dot. “I love being international, you get to meet such amazing people from all around the world. [Being international] made me go out and look for the art that was already in the country I live in.”

Mandeville’s videos are far from the vlogger format that has come to define “YouTuber” for her generation. Instead of talking directly to the camera, Mandeville crafts a narrative using visual tricks, calm audio, and introspection that goes beyond a favorite cup of coffee or morning routine. She was drawn to stop-motion as it was the most convenient way to showcase the films she saw in her mind, using supplies from her home and locations along her city streets. To achieve her dreamy look requires one key ingredient: patience.

“[A]ll the little details, as tedious as they might be, will pay off in the final film,” Mandeville wrote. “I think stop motion really helps you understand how complex film is and where it began. When you are in front of the camera shooting frame-by-frame, you get to know your film inside out.”

While she’s far from the only young YouTuber taking risks with the artform, Mandeville’s unique perspective has enabled her to bring those inspiring stop-motion clips to a larger audience: She partnered with SoulPancake after she made a video response to one of their videos. In addition to her clips, she says she tries to make her “lifestyle a form of creativity” and involve art in all of her life.

“I love performance and being on stage,” she wrote. “I love painting, music, writing, illustrating and fashion. I definitely don’t feel limited to film making and YouTube.”

That said, Mandeville says she plans to continue with YouTube in her future, while adding in short films and a book project. In each, she’ll continue the spirit of openness that defines her YouTube videos and will forge deeper connections with the “collaborative community” she says she has discovered thanks to sharing her art on YouTube.

“It has been insane for me to talk to strangers who know me so well from watching my videos, but definitely strange in a good way,” Mandeville wrote. “I feel like I am very honest with what I say in my films, so though it can be scary to be public with parts of my life, it is also so exhilarating to know that so many more people can understand parts of me that otherwise would have been so difficult to convey without film.”