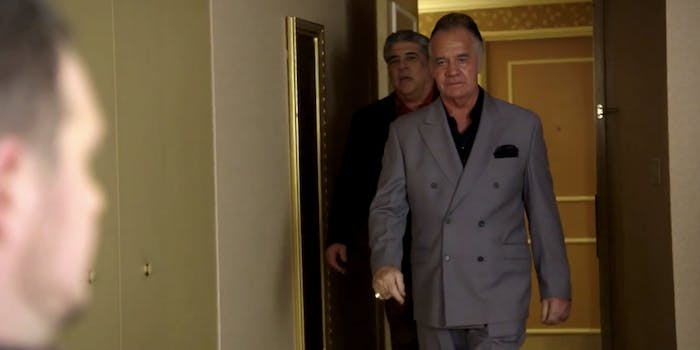 Paulie Walnuts and Big Pussy are on the job.

If used to be that if you wanted to watch Game of Thrones, you had to barter for an HBO GO password like it was a cigarette in prison, but no longer. With the launch of HBO Now, the network has made its hit programming available to stream without customers having to pay for expensive cable packages.

But just because it’s cheaper doesn’t mean it’s free. To make sure that they get paid for their programming, HBO sent a few Sopranos stars to shake down a kid by the name of Jake Caputo.

Three years ago, Caputo launched TakeMyMoneyHBO.com and began a tweet campaign to let HBO know just how much he and other fans would be willing to pay for a standalone service. With the launch of HBO Now, the premium cable network decided it was finally time for Caputo to make good on his tweets and asked Salvatore “Big Pussy” Bonpensiero and Paulie “Walnuts” Gualtieri to help them cash in.

Everyone who’s torrented Game of Thrones, be warned. Paulie and Big Pussy are coming for you, and they certainly won’t be as gentle without the cameras around.