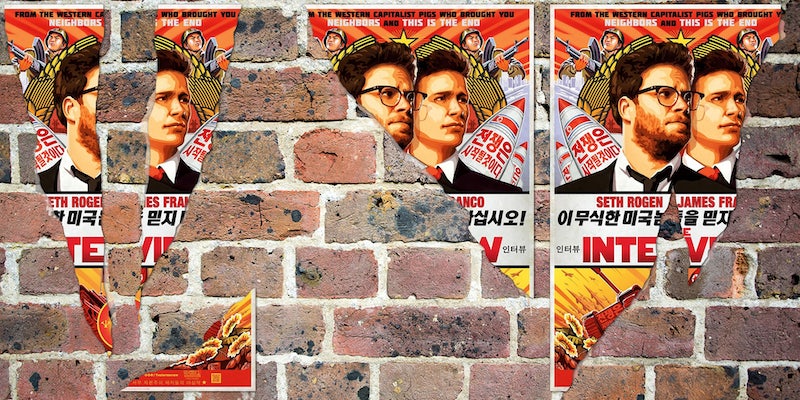 Sony Pictures Entertainment has canceled the Dec. 25 release of its action comedy film The Interview, following a threat by a hacker group to retaliate if the movie opened and a decision by the largest American theater chains to cancel all of their screenings.

As recently as yesterday, Sony appeared to be standing firm against the hacker group, which calls itself the Guardians of Peace, even after the group promised a violent reprisal if the film premiered as planned. Sony’s decision to allow theater owners to cancel their screenings led to across-the-board cancellations from the major players, including Regal Cinemas and AMC Theatres. A company statement explained that the theater companies’ decisions had prompted the studio’s change of plans.

“In light of the decision by the majority of our exhibitors not to show the film The Interview,” a Sony Pictures statement read, “we have decided not to move forward with the planned December 25 theatrical release.”

In its statement, Sony said it “completely share[d]” theater companies’ “paramount interest in the safety of employees and theater-goers.”

Despite the apparent concern of Sony and its theater company partners, the Department of Homeland Security (DHS) said on Tuesday that there was “no credible intelligence to indicate an active plot against movie theaters within the United States.”

The decision by Sony Pictures, nearly unheard of in the history of modern American cinema, comes as the company reels from what it called “an unprecedented criminal assault against our employees, our customers, and our businesses.” The Guardians of Peace hack has led to the release of terabytes of private conversations and planning documents, and Sony has threatened to prosecute journalists who report on the stolen material.

Because The Interview focuses on a plot to kill the dictatorial leader of North Korea, many speculated at first that the Guardians of Peace were affiliated with or controlled by the North Korean government. The regime has denied these allegations, and the FBI has been unable to substantiate them.

It is extremely rare for a Hollywood studio to cancel the release of one of its movies. The Weinstein Company canceled the Dec. 19, 2012, premiere of Django Unchained following the Newtown, Conn., school shooting, but the movie opened a week later, on Christmas Day. The release of V for Vendetta was similarly pushed back from Nov. 5, 2005, to March 17, 2006, but reports of why vary.

In its statement, Sony did not address the possibility of a future release. According to documents leaked in the Guardians of Peace hack, The Interview had a budget of $44 million.

Update 6:45pm CT, Dec. 17: A Sony spokesman said the company has “no further release plans for the film,” such as video-on-demand or home video, following speculation that the company would end up pursuing one of those routes in lieu of a theatrical run.

Photo via Chris Fleming/Flickr (CC BY 2.0) | Remix by Jason Reed