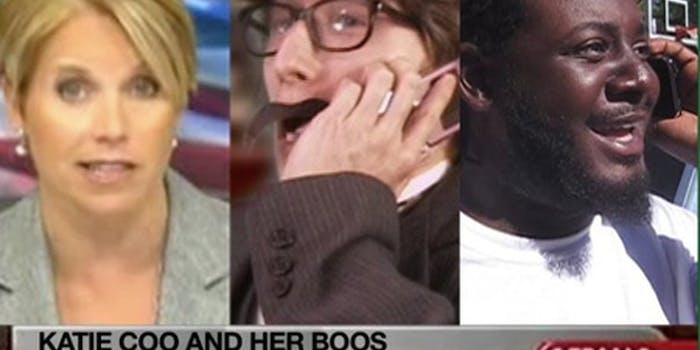 Songify this: An interview with the Gregory Brothers

The Gregory Brothers have struck YouTube gold once more.

The Brooklyn pop-culture satirists turned the opening prayer by Pastor Joe Nelms of Family Baptist Church at the NASCAR Nationwide Federated Auto Parts 300 – an amusing entreaty of corporate branding and Talladega Nights references – into an alternate Ballad of Ricky Bobby. The video has already clocked more 1,151,019 views on YouTube.

Of course, the Gregory Brothers – siblings Andrew, Michael, and Evan with his wife Sarah – are no strangers to Internet notoriety. The group turned Antoine Dodson into a household name, notching two of the most viral singles of last year with “The Bed Intruder Song” and “The Double Rainbow Song,” and more recently remixed the Academy Awards and anchored the DigiTour, the first-ever packaged tour of YouTube stars.

Now the Gregory Brothers are pushing their own Auto-Tuning iPhone app, Songify. To mark the occasion, Andrew and Sarah Gregory offered some insight into what exactly makes a good unintentional singer.

Daily Dot: Where did the idea for Auto-Tune the News come from?
Sarah Gregory: The four of us had been friends and cohorts for awhile. We went out on tour together back in 2007. Around the end of that tour, Michael was graduating from college and decided to move up to New York, where the rest of us were already living. We continued to make music together. Around the Presidential debates of 2008, Michael decided to put out a music video about the first debate between Obama and McCain. That and the series of videos that followed that were the origins of what Auto-Tune the News is now. It was more of a traditional music video, where Michael was singing this song to Obama and McCain. Then it was just a little twist of the imagination to actually apply Auto-Tune to the candidates’ voices and see if we could actually make them sing along.

Andrew Gregory: For that first video that we did put Auto-Tune on, which was the Vice Presidential debate, we were actually kind of lucky that it was the Palin and Biden. They turned out to be two of the greatest unintentional singers of all-time. They’re just so passionate and screaming all of the time about America, whereas Obama and McCain were so measured and thoughtful. Anybody can do an Obama impression: “Well, what we’re going to do, is we’re going to think about it.” While he’s a very bombastic speaker in front of large crowds, in the debates he wouldn’t have Auto-Tuned well, and he didn’t in later videos. But because we used Biden and Palin first, we caught a glimpse of the future and knew this could really work.

DD: What are the qualities that make a good unintentional singer?
SG: They’re pretty similar to the qualities that make an intentional singer good: a strong voice, a clear message, and passion. There’s also the other part of the picture, which is unintentional songwriting and lyricism. A lot of times, a person’s voice might be great but the words that he or she might be speaking aren’t moving or vice-versa. It’s a combination of things that make a good pop singer and some special magic that takes it to the next level.

DD: Is there anything that doesn’t sound better Auto-Tuned?
AG: I remember in Auto-Tune the News #2, which was one of our first videos that went viral, we put Sean Hannity in the video. We thought he would be a great unintentional singer because he’s always screaming. We hadn’t quite gotten our finger on the pulse of what works yet. There’s this grating quality to his voice that made it come across like he was just singing one or two notes. Yes, Auto-Tuning does make everything sound better, but it does not do that equally to all unintentional singers. Some end up better than others.

DD: Do you see the series as a sort of throwback to the traditional storytelling aspect of hip-hop by artists like Slick Rick?
SG: I hadn’t thought of it before [laughs].
AG: That is true in that in an episode of Auto-Tune the News you do really get a narrative and a story in a way that you’re not getting in contemporary hip-hop. I would be stretching it though if I were to tell you that we were intentionally inspired by people like Slick Rick.
Sarah: It’s funny. We kind of let ourselves be at the whim of the material and the news that finds its way to us. Some of the episodes have a real through line and some of them just end up being a hodgepodge of things that are only thematically the same in terms of the music that’s behind it.

DD: How do you find your material? Are you checking out trending topics on Twitter?
SG: Early on we were doing a lot of the hard work of sifting through the blogosphere and seeing what was weird, bizarre, and exciting. Luckily, now we have a really loyal group of fans that often submit their own ideas and nominations for unintentional singers.
AG: Sometimes it’s an overwhelming amount of potential singers and unintentional singers.

SG: When we see a few of the pieces rise to the top over a couple of days, then we’ll know that that’s catching widespread attention, but we do still try to stay abreast to what’s going on and what’s interesting.

DD: How concerned are you with the timeliness of these videos? Is it always a mad rush to get them out while the topic’s buzzing?
AG: A traditional episode of Auto-Tune the News, where there’s a couple of different stories and unintentional singers, can sometimes take months, just because you have to find that right news. You might be waiting two months for the right thing to come along. Then it takes longer for the writing and the editing. Some of the viral stuff we’ve done recently though, like the “Double Rainbow Song” or “The Bed Intruder Song,” those got turned around in just a day or two.

SG: That was one of the early successes of the debate videos. We were able to get them out the morning after the event. So when people were searching of footage of the event, our video was the one that was lumped in there to people’s surprise.

DD: Have you run into any legal hurdles with your sources or from new organizations?
SG: It’s mostly just giggles of excitement. People like to see their musical personalities brought out. We pretty much consider everything that we do parody, and we take from a bunch of different sources, just a couple seconds here or there of each.
AG: Even Katie Couric, Glenn Beck, and Joe Biden have pop singer aspirations too. They’re not going to bite the hands that feed them.

DD: The Gregory Brothers song “Don’t Give Up on Me,” is a serious jam, but no offense, it’s probably not going to go viral or get 100,000 downloads on iTunes. Is there any frustration about the difference in reaction you see from the two projects?
AG: We just take it with a grain of salt. As a musician, you’re just thankful for what you get. There’s a wealth of talent out there, and if it means that one percent of Auto-Tune the News fans go over and listen to our other stuff and hopefully like it, that’ more people than would have listened to it before. We’re not afraid of knowing that’s what we’re popular for.