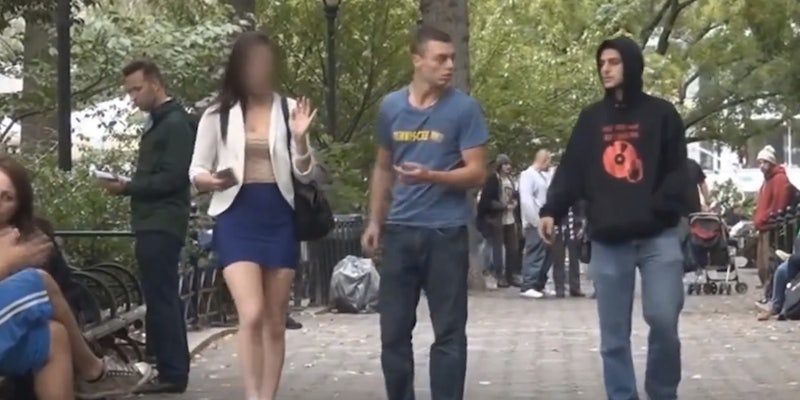 How YouTubers are exploiting social experiments for traffic

According to a YouTube prankster, social experiment videos are not just dangerous; they’re also a cheap ploy to get easy traffic.

In recent months there’s been an explosion of “social experiment” videos on YouTube, where people purport to test a stereotype or assumption by filming real people reacting to certain circumstances. But for many of these videos, as they rack up millions of views, it comes to light that they’re less than straightforward set-ups. For example, a recent video featuring a homeless man using $100 to help feed others that skyrocketed to viral success has been called out as a hoax. Earlier this year Sam Pepper ignited outrage after posting a video of him pinching girls’ butts; he later claimed was a staged part of a social experiment.

These moments have been called out by fans and reporters, but now someone inside the community of pranksters is making his voice heard in opposition. Andrew Hales is a YouTuber who has 1.7 million subscribers and trades in videos like “Breakdancing Santa” and “Awkward Junior High Dancing,” a much more PG style of pranking. In a new video he points out that the offending “social experiment” pranksters follow a formula that riles up commenters by setting up racist, sexist, or otherwise controversial moments and inserting actors or encouraging real people to interact with the subject. Hales does note that he’s not saying definitively that the videos are fakes, and by styling his takedown as a conspiracy theory video, he’s able to point out the issue while still parodying the situation in some way.

This is not the first time Hales has called out prank culture. In a previous video, called “SHOOTING AT PEOPLE IN THE HOOD PRANK,” he played on the popular prank trope of white pranksters attacking black pedestrians to see how they react. His video escalates to murder and then dead selfies.

The question is, can the social experiment avalanche be reversed? As Hales also point out, many websites, including this one, post social experiment videos regularly, for the same reason that the YouTubers make them: Social experiment videos get online traffic. They typically fall into the category of either heartwarming good news or comment-bait aggravation, both of which stir readers to click, comment, and share the content.

The quest to rid the Web of such kinds of content is age-old. Huffington Post still has a sideboob category under “news,” and someone out there will continue to produce “social experiments” as long as someone clicks.