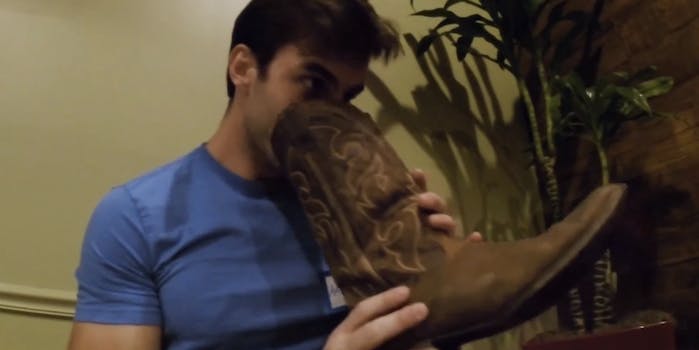 Would you rather smell a guy's dirty shoe or listen to your date talk only in third-person?

Speed-dating is awkward enough, but what if you had to adhere to whatever rules your friend placed upon you during the minutes-long encounter? Chris Demarais and Aaron Marquis of Rooster Teeth’s show Social Disorder did just that, giving each other increasingly strange guidelines during a matchmaking event.

While the full episode doesn’t air until Saturday, we have a sneak peek at just how awkward their speed-dating event ended up being with their strange demands.

The pair told the Daily Dot the seed for Social Disorder was planted in early 2014, but they took time to make sure it would be unlike every other prank show on YouTube.

”One day we said, ‘why not make a social experiment show where we try and screw each other over? We’ll set up some sort of weird social experiment and try and one up each other … for points,’ Demarais explained via email. “So Social Disorder is just our real life friendship put into show form. It’s relentless chaos and sabotage.”

While other prank shows have come under fire recently for promoting harassment, the Social Disorder duo says the key to their show is that they aim to make fun of themselves, not others.

“In Social Disorder, and we work hard to create situations with a light tone,” said Demarais. “In the speed dating episode, the women were extremely nice and patient. For the most part, they responded like anyone else would while we acted like two complete weirdos.”

“Weirdos” is a bit of an understatement. During the speed-dating event, Demarais had to speak completely in third person during a date, with his poor matched dater just barely holding back from rolling her eyes at his every sentence. Marquis had it harder, though, and was tasked with trying to convince a girl to let him smell her shoes—and to get her to sniff his in exchange.

“Aaron wears these old, smelly boots all the time and I loved the idea of making him smell them,” joked Demarais. “And I figured that once a girl smelled his feet, there would be no way she’d be interested in him.”

It was not all awkwardness for every couple involved. The event was a legitimate speed-dating evening, and according to Demarais, some real-life couples may have found love thanks to the show.

“We can’t tell you whether or not we got matches, but we will say that one of us did better than expected,” he said. “Also, this was a real speed dating event that we hosted, and 5 couples ended up matching at the end of the night. We might just give up the show and start hosting weekly speed dating events.”

The full episode premieres Saturday on Rooster Teeth‘s website at 11am CT.