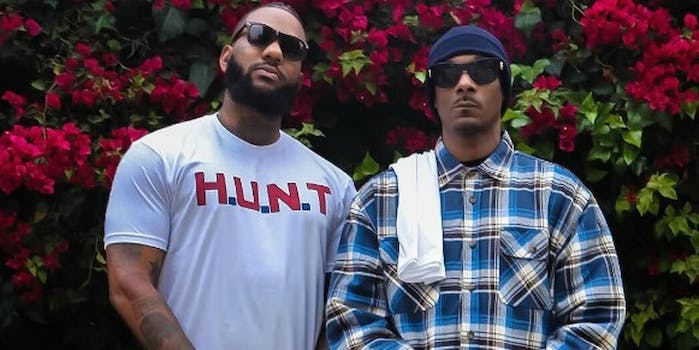 The two planned the march early Friday morning and announced it via The Game’s Instagram inviting men of all races—but specifically minorities—to join them in marching from a parking lot to LAPD headquarters on the same day the police department graduated its newest class of officers.

Operation H.U.N.T Meet NOW at Joe’s auto park parking 1221 west 3rd street Los Angeles California 90017 Calling: ALL AFRICAN AMERICAN MEN, MEXICAN AMERICAN MEN & any other RACE of REAL MEN with heart to stand with us today & walk peacefully to the LAPD headquarters. [LEAVE ALL WOMEN & CHILDREN AT HOME… THIS IS OUR MISSION FOR THEM] Do not: bring any weapons or anything illegal. Do not come high or belligerent.. We don’t need any HOT HEADS or anyone there for the wrong reasons… We will stand as we are, UNIFIED. I’m calling ALL GANGS, ALL RACES, ALL GROWN MEN affiliated or not & WE WILL STAND UNIFIED tomorrow !!!! Our numbers are all the weapons we need !!! We do not need to be dumb, retarded or uncivilized today… ALL WE NEED IS EACH OTHER… I will not lead any of you into a trap !!!!! Objective: to make the Californian government & it’s law branches aware that from today forward, we will be UNIFIED as minorities & we will no longer allow them to hunt us or be hunted by us !!! Let’s erase the fear of one another on both sides & start something new here in the city of Los Angeles, a city we all love & share ! There are many things that have to be done to rectify this situation that has plagued us for hundreds of years & UNIFICATION is the 1st step !!! Again, I’m asking for ALL of my AFRICAN AMERICAN, MEXICAN AMERICAN & any other AMERICAN who has the heart to STAND WITH US to meet us at the above address & take the 1st step into altering our future for our children & our FAMILIES….I LOVE EVERY ONE OF YOU & WE OWE IT TO OURSELVES & OUR FAMILIES TO BE MEN & TAKE A STAND MY BROTHERS.. THE TIME IS NOW – The Game 📸 @derekdidit

The Game, born Jayceon Taylor, said they want the California government to be aware of an issue that has “plagued” blacks “for hundreds of years.”

“We will be UNIFIED as minorities & we will no longer allow them to hunt us or be hunted by us !!! Let’s erase the fear of one another on both sides & start something new here in the city of Los Angeles, a city we all love & share !” the rapper wrote on his Instagram.

About 50 men showed up to the demonstration, many of them wearing shirts with H.U.N.T on them, standing for ‘hate us not today.’ Snoop Dogg posted a video of the crew making its way to the police station.

Both rappers sat in a conference room with a handful of officers to discuss the future of police relations in minority communities. Snoop and The Game also stood with Los Angeles Police Chief Charlie Beck in a press conference following the meeting. Beck called for a de-escalation of violence in L.A.

Snoop Dogg and The Game met with the LAPD to rebuild relations with police https://t.co/J2vPxHfMBT pic.twitter.com/0NETRHWYFw

The demonstration comes in the wake of the shooting of two black men, 37-year-old Alton Sterling and 32-year-old Philando Castile. Both men were killed at the hands of police in the same week, igniting protests around the country. One protest in Dallas turned deadly Thursday when a sniper shot 12 officers, killing 5. The shooter was identified as 25-year-old Micah Xavier Johnson. The Game shared his thoughts on the peaceful protest gone bad with the Los Angeles Times.