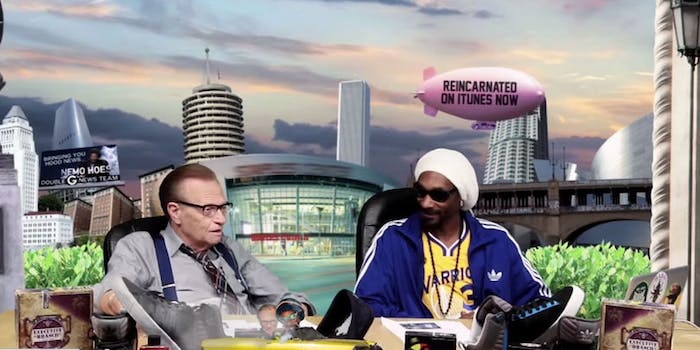 Guests have ranged from Pharrell to Larry King

Snoop Dogg is taking interviewing to a new high.

The Artist Formerly Known as Lion has abandoned rap for a traditional question-and-answer interview program on his self-created “Double G News Network” YouTube channel. Before you ask what kind of credibility he has, keep in mind that talk shows have been awarded to everyone from Chevy Chase to Jay Leno.

And, true to Snoop form, he conducts the interviews while smoking a joint.

Often, he will pass the joint to his interviewees, as seen during his interview with the Korean bobsledding team.

Guests of his have ranged from musician Pharrell to even Larry King—who “breaks ground” as the first Jewish rap star.

Naturally, Snoop is no stranger to marijuana-fueled interview segments. He is a god among redditors, providing incoherent answers to pretty much everything during his IAMA sessions and helping to moderate the all-stoner subreddit r/trees.

The question remains: Can we expect Jimmy Fallon and Stephen Colbert to soon follow suit on their own programs?