One there will be a VH1 documentary about this historic trolling.

Reddit investor Snoop Dogg and Iggy Azalea have called an end to their war of words—and to be honest the whole thing was stupid to begin with.

The whole thing started when Snoop posted a disparaging photo of Iggy to his Instagram.


Iggy was rightfully indignant and tweeted her displeasure with Snoop’s behavior. 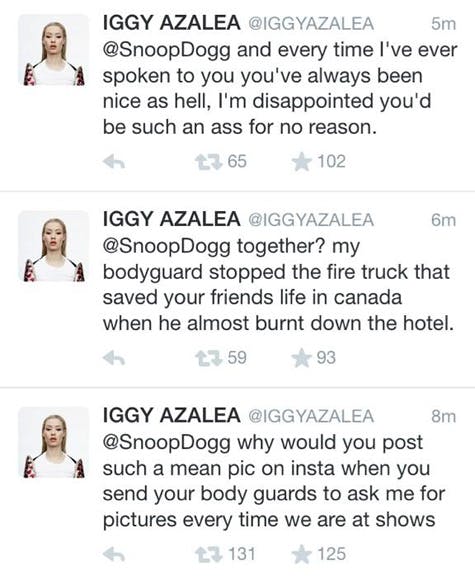 The reaction from many onlookers was that Snoop is a known troll—nothing he posts can be taken too seriously, and Iggy needs to take a joke because Snoop meant no harm by it.

Egged on by his followers, Snoop released a video response to Iggy’s tweets, calling her a “bitch” and a “cunt.”

Last one until she speak now shut da Fuc up ubitchu.


Iggy Azalea’s boyfriend, L.A. Lakers guard Nick Young, jumped in to defend Iggy, but rather than defuse the situation, he seemed to ignite it more.

Ain’t nobody worried about no SnoopLion .. This dude Just goin thru a midlife Crisis you Go get convertible yet . OG’s out here losin

Snoop posted more photos on Instagram attacking Iggy, and the Internet responded by both supporting and attacking her.

Ok last one. Hahahahaha I didn’t make this shit up I jus post smoke n chill Hahahahahahah. So says Todd

Any grown ass man talking shit to a woman is not a MAN.

Where was the white media when T.I threatened to push me down the stairs though?

Even Snoop’s teenage daughter Cori voiced her displeasure with her father’s behavior.

Iggy fired another round of shots at Snoop questioning his current legitimacy as an artist, his parenting skills, and the reason for his constant personal attacks.

@SNOOPDOGG congrats on ur success but my dog taking a shit is news worthy now days & I dont need to troll for attention, can u say the same?

@SnoopDogg i also don’t have a young daughter at home looking at what i do… can you say the same?

@SnoopDogg the real question is why IS someone SO accomplished trolling other artists?

After an apparent conversation with Iggy’s label boss, rapper T.I., Snoop posted an apology to Iggy on Instagram stating he was sorry “it’s officially over” and he “won’t do it again.”

It’s over I’m bac on my cool shit no harm no foul. #ifitaintaboutthe💵💵💵much love @troubleman31t respect sorry bout that

I appreciate the apology @snoopdogg

Let that be that people, time to focus on the positive things I’ve got going on. no time to dwell on the negative.

While it’s odd to be commending a grown man for admitting he is in the wrong, if history has taught us anything, apologies in rap beefs are rare if not nonexistent. It’s just a shame that a rapper as popular and respected as Snoop, one with high school age children to boot, would take so long to realize that what he was doing was essentially bullying—especially when his target was one as easy as a white female rapper in an industry crowded with black men.

That’s not to say that Iggy can’t hold her own—she can—or that she can’t be every bit as successful as any of her male counterparts—she is—but she is undoubtedly viewed as an outsider and as such susceptible.

All that said, this “beef” was silly and never needed to happen in the first place. I yearn for the days when beef between platinum-selling rappers was settled with rap bars and not online memes and emojis.

Photo by Laura Murray/Flickr (CC BY 2.0)