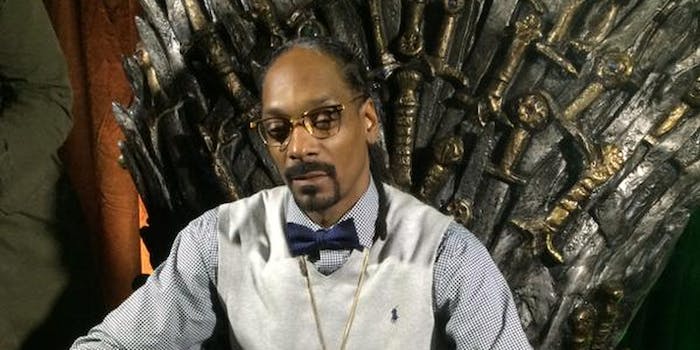 Dragons aren't the only reason he tunes into the immensely popular HBO fantasy drama.

Game of Thrones may be one of the biggest fantasy epics of our time, but it also doubles as a history lesson, according to Snoop Dogg.

In a recent interview with the New York Post about his new album Bush, Snoop was asked about his contribution to the latest “Catch the Throne” mixtape. In response, he elaborated on his love for Game of Thrones, a love shared he shares with millions of viewers and many of his fans.

“I watch [Game of Thrones] for historic reasons, to try to understand what this world was based on before I got here,” he said. “I like to know how we got from there, to here, and the similarities between then and now.”

The interviewer, slightly thrown off, then asked him about the parallels between the real world and Game of Thrones, which he noted was a fictional TV show. Snoop wisely left out the dragon talk but pointed out that some of the political games were the same.

“That kings still rule and a bitch f–ked everything up, in every situation!” Snoop said.

At this point, it would be easy for us to point out that Game of Thrones is a fantasy drama (albeit a very good one) and then make a lame joke about Snoop and weed, which is basically low-hanging fruit (and lazy on our part).

It’s also possible that Snoop is fucking with us because he has to do a long press tour about his album and he may get bored. We wouldn’t put it past him.

But, regardless of his intentions, he’s not entirely wrong about historical parallels. White walkers, shadow assassins, and dragons aside, Game of Thrones is laced with historical influences—even more so than some historical dramas on TV.

George R.R. Martin has long said that Game of Thrones and the entire A Song of Ice and Fire series was loosely inspired by the War of the Roses  that eventually put the Tudor dynasty on the throne in England. (Some of Martin’s characters even line up with historical figures.) He has also defended the sexual violence in the show and books by saying that it’s been a part of war for centuries and that to not include it in “a narrative centered on war and power would have been fundamentally false and dishonest.”

Incest as a plot point—seen with the Targaryens and Jaime and Cersei Lannister—existed throughout history, with the Ptolemies of Egypt and more recent European royalty determined to keep their bloodlines pure. The horrors of the Red Wedding are based on two events from Scottish history that may be even more disturbing than what we got on TV.

And as Martin demonstrated with The World of Ice and Fire, there’s plenty of real-life influence throughout Westerosi history.

Could Snoop Dogg find a more accurate history lesson somewhere else? Of course—but not from any other TV show with violence and boobs.