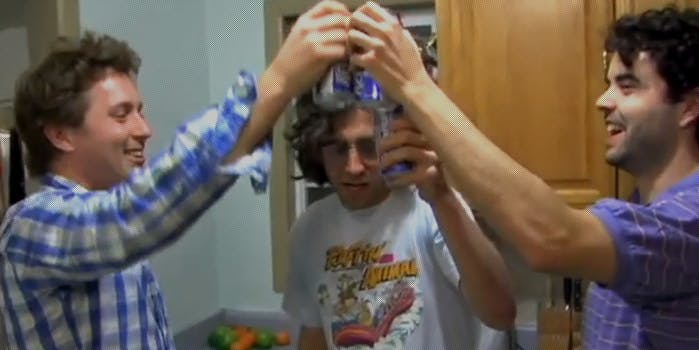 Before they were on ‘SNL,’ the new cast members were all on YouTube

Check out the videos that got them hired.

When you’ve kissed Patricia Clarkson in a YouTube video, there’s nowhere to go but up.

With the open spots confirmed filled for this new season of Saturday Night Live, it comes as no surprise that all of the five new cast members have prominent YouTube or Tumblr pages. The line between Hollywood and YouTube continues to blur, and though the performers were mainly noticed for their work at the legendary comedy theater Upright Citizen’s Brigade, their sizable online followings sure didn’t hurt.

Noël Wells, for instance, had popular videos of her doing impressions of singers like Zooey Deschanel, Miley Cyrus, and Adele. Beck Bennett and Kyle Mooney were prolific sketch writers for YouTube and John Milhiser runs a popular funny Tumblr site. Mike O’Brien is the one who locked lips with a famous actress.

Here’s a tasty preview of what these talented comedians will be bringing off the web and onto TV screens in the fall.

Bennett is now well-known for appearing in AT&T commercials where he makes jokes with children, but he got his start putting sketches on YouTube with the group Good Neighbor and on his channel, BeckBennett.

The sketches are mostly conversation-based and not elaborately shot, but they work because they’re funny. The channel has more than 178,000 subscribers and usually involve the “every day” lives of the three guys in the troupe.

Bennett wasn’t the only “Good Neighbor” hired as a performer either.

Mooney is the shaggy one in the Good Neighbor videos. He was hired alongside Bennett as a performer while Dave McCary was brought on to direct videos. The last time SNL hired a sketch troupe, it was Andy Samberg and his fellow Lonely Islanders, Jorma Taccone and Akiva Schaffer. They ended up creating the Digital Short as we know it today–and that’s worked out pretty well for SNL. Good Neighbor could do the same.

Mooney shines in this bit giving a toast.

He also has his own channel (simply called “Kyle”) which has more than 119,000 subscribers.

Milhiser puts sketches online with the group Serious Lunch, which has worked with Lorne Michaels’ online video company Above Average. Here’s a YouTube video of Milhiser acting in a parody of Proactiv commercials.

Or this one, making fun of the Step Up movies.

O’Brien stars in a show called 7 Minutes in Heaven, where he interviews celebrities inside a closet and tries to kiss them at the end. He’s had the likes of Jeff Goldblum, Amy Poehler, and Patricia Clarkson in his clutches, and even got a full-on make out sesh with Clarkson.

I profiled O’Brien, a writer for Saturday Night Live, for the New York Times Magazine in 2012 because of the smash success of his YouTube series. He appeared in some sketches on SNL last season, but has this year been promoted to performer.

Can’t wait to see him kiss some of the show’s hosts.

Noël does an uncanny impersonation of manic pixie goddess Zooey Deschanel in a YouTube show called Hey! The Zooey Deschanel Show. Saturday Night Live already does a Zooey Deschanel talk show parody and Wells will for sure be picking up that mantle. Aside from that series, she’s also posted tons of sketches and vlogs on her channel over the years.

She’s also friends with My Drunk Kitchen’s Hannah Hart, a beloved YouTuber, and has collaborated with her in YouTube videos, doing amazingly on-point singing impressions.

Each of them brings something different to the SNL table comically, but it was all talent they showcased first on the Internet.