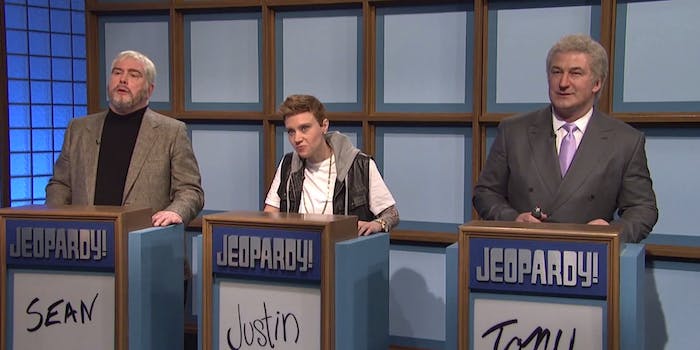 Even Turd Ferguson makes an appearance.

Too many celebrities? There was no such thing when it came to bringing back one of Saturday Night Live’s most beloved recurring sketches from the modern era for its 40th anniversary special.

It’s a prime example of what would happen if you stuck a bunch of clashing personalities and colorful characters in a room with Will Ferrell’s Alex Trebek, and it doesn’t take long before “Celebrity Jeopardy” descends into mass chaos.

It must have been hard to narrow the lineup down to two celebrities alongside Darrell Hammond’s Sean Connery at the start, but the show quickly corrected itself by just letting all of them loose. And yes, they went there with the “prerecorded” Bill Cosby clip.

In “Celebrity Jeopardy,” everyone wins—well, everyone except Trebek, who’s likely wondering why he’s still doing this show.