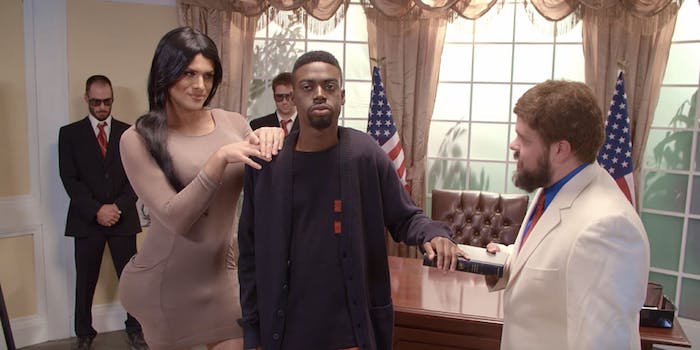 What will the world be like when Kanye is president?

Press briefings that end in mic drops and a photo of Whitney Houston as vice president? All just a part of Smosh’s version of a Kanye West presidency.

When West made the announcement during his VMA acceptance speech that he’s got plans to run for president in 2020, Twitter exploded, and the minds of comedians everywhere went into overdrive. YouTube masters Smosh were no exception, and they’ve released a video that imagines a world post-eight years of President West.

The video’s highlight is perhaps Anthony Padilla’s turn as First Lady Kim Kardashian, who starts off simply posing at West’s side endlessly and campaigning for Internet for everyone, but eventually takes over as acting vice president and, well, pulls it off.

We just have four and a half more years to find out if West makes our dreams a reality.