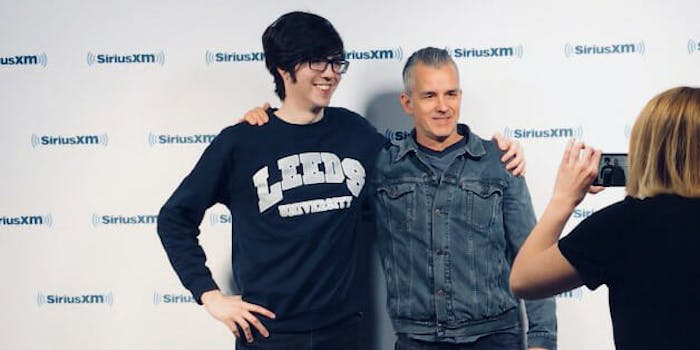 Hey now, you're a cover song.

Smash Mouth and Car Seat Headrest made their Twitter bromance official this week: The bands covered each other’s songs to display just how much each band respects one another’s music.

This collaboration has been a long time coming. The bromance began on Aug. 1, 2016, when Smash Mouth tweeted that Car Seat Headrest had released one of the best songs of the year.

@carseatheadrest One of the best songs of 2016 point blank!

Amazing constructed song, def gonna piss off the radio gate keepers but F them! All main choruses should start at 3min. ha!

SomeBODY once told us that @SmashMouth tweeted some love at @carseatheadrest and now the two bands are collaborating! @siriusxmu got the full story!
Sing the classic with us: 🎶 Hey now, you're an all-star…🎶 pic.twitter.com/ZbKTwpx3Xj

Car Seat Headrest frontman Will Toledo and Smash Mouth’s Greg Camp joined Eliscu for a conversation about the covers. Camp said he was especially impressed by Toledo’s lyricism.

“His lyrics are just amazing. That’s always the main thing I go for the artists that I listen to,” Camp said. “His automatically grab you, you know, they pull you in. Whereas with Smash Mouth, the music might grab some people, and then you start listening to the lyrics and go, ‘Oh, that’s a little darker than it sounds.’ I like to think that he and I have some things in common in that way.”

The collaboration has officially been dubbed #CarSmash by Smash Mouth online. Right now, only their cover of “Something Soon” is available to listen to online and fans so far dig it.

This is amazing!! Never been so hyped for a collab like this #CarSmashhttps://t.co/CdRtl8SbNv

Worried my last words are gonna be something incredibly stupid like: "This Smash Mouth cover of a Car Seat Headrest song bangs."

sometimes you wake up at 4:30 and aren't sure why and then you find out that smash mouth covered car seat headrest https://t.co/AmpwiGt4SP