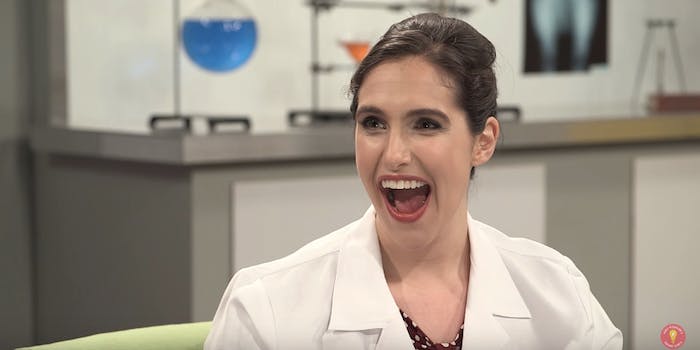 Amy Poehler's Smart Girls' 'sexy' new webseries can teach you a thing or two about women in science.

Women in science are no strangers to sexism. From underlying assumptions about women’s abilities to cutting remarks from distinguished scientists, it seems female scientists still have to fight for the right to don a lab coat. But don’t worry: The ladies are fighting back full-force. And their secret weapon is humor.

Amram, former Parks and Recreation staff writer and long-reigning Twitter master, explored similar themes in her book Science… For Her! “I wanted to show, through my insane satirical character, that stereotypes are negative and destructive,” Amram told the Daily Dot. Her “character” in Experimenting plays up that tone, acting boy-crazy, looks-obsessed, and perpetually perplexed compared with her savvy and accomplished guests.

If Amram’s persona seems crazy, she should. It’s a pointed attack on the casual aggression that plagues women in science today. Said Amram:

“It’s crazy how much resistance women in STEM are still met with. It feels like every few weeks, another person makes insane claims about a woman’s inability to practice science or math. It’s good for my show, though—free publicity! My female friends who work in math, science, or technology all have horror stories about implicit or explicit sexism they’ve experienced. I hope that my book and webseries helps bring up this continuing conversation in a fun and funny way.”

New episodes of Experimenting With Megan Amram are available the Smart Girls website each Monday.