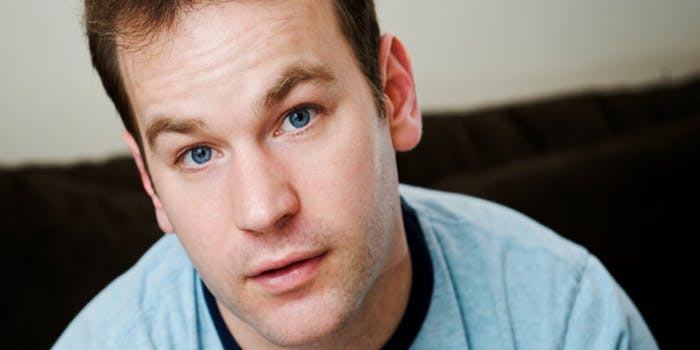 The safe-for-work comedian talks to the Daily Dot about his new film, Sleepwalk With Me, and his Twitter campaign to bring it to a theater near you.

Comedian Mike Birbiglia’s father always told him to keep things close to the chest. A neurologist, he believed that the more someone knew about you, the more he or she had to use against you in the future.

That lesson was apparently lost on Birbiglia, 34, who has instead shared his life and struggle with sleepwalking with millions of people—on Twitter, in comedy clubs, and now in a refreshing romantic comedy playing in movie theaters across the country.

But unlike most comedians who lean on obscenities and insults like a crutch, Birbiglia delivers his jokes in a way that is true to himself and pleasing to his parents.

“When I started out in comedy they would say, ‘We hope you’re not going to be one of these dirty comedians,’” Birbiglia told the Daily Dot. “It’s some combination of me being an English major in college and having an interest in the writing and my very conservative parents.”

In fact, it was at Georgetown University that Birbiglia decided to try his hand at comedy, after making two indie films on a shoestring budget that failed to garner significant interest.

“So I thought, well, I can do stand-up comedy,” Birbiglia told the Daily Dot. “It has no overhead. Literally no overhead. You can do it outdoors.”

Combining aspects of Mitch Hedberg’s self-deprecating one-liners and Bill Cosby’s squeaky clean demeanor, Birbiglia developed a unique style that goes over as well on Comedy Central as it does on NPR or Twitter, where he has nearly 150,000 followers. Just check these two recent noteworthy tweets:

“For the cost of one cup of coffee, you could feed a village. If it’s Starbucks, six or seven villages.”

“Just got an email offering a flatter belly. I don’t want that. I want a belly with character.”

Now, upon the release of his debut feature film, Sleepwalk with Me, Birbiglia is calling upon his Twitter followers to help bring the movie to their local theater.

The production is based off of his one-man show of the same name and his New York Times bestseller Sleepwalk With Me & Other Painfully True Stories, a painfully funny and autobiographical account of Birbiglia’s life and relationships. It hinges on a time he accidentally walked out of a second floor hotel window while dreaming that a missile was heading toward the building, NPR reported. (Birbiglia received 33 stitches on his legs and was diagnosed with a dopamine deficiency.)

Under the Twitter handle @bigbirgs, Birbiglia is asking fans to support the film by contacting indie theaters in their area and by tweeting the hashtag, #BringSleepwalk. A separate website offers additional information for folks looking to help out and includes a letter of support from Ira Glass of This American Life, which produced the film.

And it’s working. So far, 16 cities have added the movie this week.

“It has been, in some ways, a dream come true,” commented Birbiglia.

And he achieved it without profanity.

“It’s bolder not to curse,” he said. “But then, what I like about not cursing is it pays certain dividends. There’s only one curse word in my movie. So what we found at Sundance and SXSW and other festivals is that teenagers are seeing the movie with their parents and [they’re] liking it together.”

For that, his father must surely be proud.