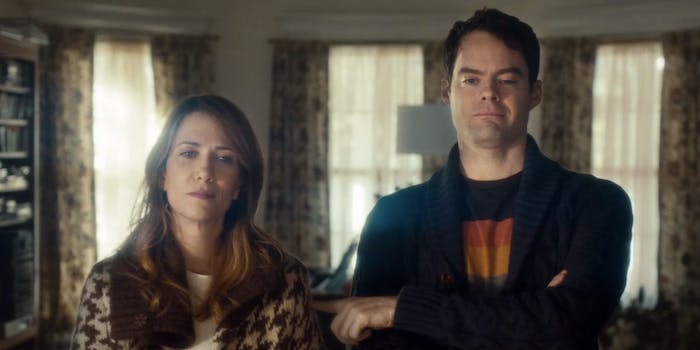 It looks as if the President of Hollywood has finally decided to let Bill Hader catch a break.

It looks as if the President of Hollywood has finally decided to let Bill Hader catch a break.

After several years of eye-catching supporting roles, Hader seems ready to dump his Saturday Night Live baggage with his first leading role in The Skeleton Twins. Hader and fellow SNL alum Kristen Wiig play estranged twins, Milo and Maggie, who are reunited after “independently cheating death.” Both siblings seem at the nadir of their lives: Maggie is in an unhappy marriage to genial Lance (Luke Wilson), and Milo, a gay man, has failed as an actor.

Milo is a long way from Stefon, but that’s not to say that The Skeleton Twins is devoid of humor. Just the possibility of Hader being the “creepy gay uncle” to Wiig’s future child gets a smile. And although Wiig lip-synching is hardly new, it’s basically impossible not to like her and Hader trading mock-vocal blows over “Nothing’s Going to Stop Us Now” (which also amuses with the unintentional reminder that the song was written for a film in which Andrew McCarthy wants to have sex with a mannequin version of Kim Cattrall).

The film was well received at Sundance (winning a screenwriting award) in January and from that screening holds a current 100% Fresh rating on Rotten Tomatoes.

It looks depressing, awkward, and eventually life-affirming—not unlike director Craig Johnson’s tale of accidentally taking his parents to see Nymphomaniac.