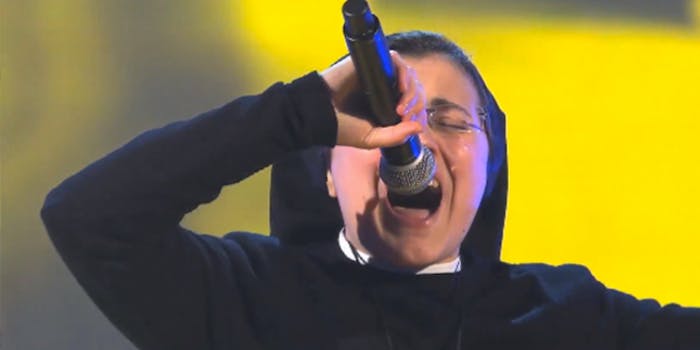 Like a scene out of a lost Fellini film, Italy’s version of The Voice just showed it’s lot more fun than America’s.

Sister Cristina Scuccia, a 25-year-old member of the Ursuline Sisters of Milan’s Holy Family, recently competed on the show. She’s always loved singing, and in 2008, she found her calling in the Sisters’ music hall. Her performance of Alicia Keys’s “No One” in a blind audition turned the judges into human reaction GIFs. And there in the wings during her performance are her fellow sisters, supporting her, like a Sister Sledge song come to life.

After the performance, she said she hopes Pope Francis will call her now. Don’t we all. More viral nun superstars, please.

Screengrab via the Voice of Italy/YouTube