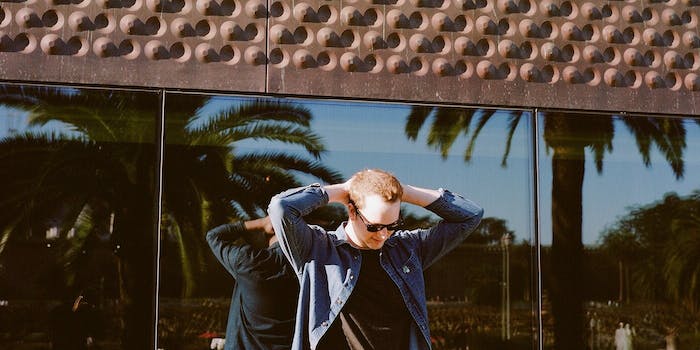 Singles Club will send limited-release vinyl right to your door

Plus: An exclusively curated new mix of artists you should be on.

The first rule of Singles Club is that everyone understands it’s a warped, hobbyist playground with a business model fit for 1969. It’s a subscription-based vinyl record service, with a digital music journal gluing its work to the Web. It hosts live events sometimes. It can throw the phrase “limited edition” around and mean it.

In other words, it’s the pure-blooded antithesis to startups that specialize in, say, adventurous app-making. Singles Club is not built to someday fund a loft office with cement floors and Ping-Pong tables—one where the wealth it gathers provides a hip façade even though the product itself is blandly calibrated.

It’s a passion project that serves as a home page for stubborn creatives that work during inconvenient, odd hours. Its two founders—Jeffrey Silverstein and Chris Muccioli, who met as networking musicians while attending Towson University—have day jobs. So do many of the artists that work with Singles Club.

But its sonic footprint and trusted taste signal a difficult-to-gauge intangible that works just fine for now.

“Jeffrey had written about Monster Rally a few times,” says Ted Feighan, known in music blogging circles as one-man band Monster Rally. He appreciated and respected the small operation. So, with the blessing of his distribution partners at Gold Robot, he reached out to Singles Club. “We’re record nerds and we loved the old-school vinyl subscription idea… I was really struck by the aesthetic of their whole thing. It’s so beautifully done.”

So much so that Feighan, a graphic designer by trade who is self-admittedly controlling about his music’s detailed branding, trusted the Singles Club guys to build their latest quarterly issue around him. Today marks the release of the fifth-such issue—an exhale-worthy benchmark for a niche enterprise.

The service began like you’d expect: “Ultimately, [Singles Club] stemmed from many conversations that Chris and I had as our music projects were coming to a close. We were looking for a way to continue to stretch our creative muscles, if you will… We wanted to work together in the music landscape but not necessarily [as] a magazine.”

The guys were in college and played indie rock. That carefree, scholarly youth withered, and the bands lost the time needed to exist. The men grew up and accepted that a steady income was central to their respective day-to-days. Singles Club sprang from that quarter-life dread that prompts one to fill a void. So the duo turned to their network and forged a channel with which to spotlight its favorite artists.

“The way that we continue to boil it down is a subscription-based record club and digital music journal published quarterly,” Silverstein says. “If you subscribe to Singles Club, you are receiving a limited-edition 7-inch record that is housed in a kinda custom 7-inch box, plus a Singles Club pin and a 45 adapter and some goodies.”

Every issue is a sweet and sour dish with a physical and a digital component. The latest Monster Rally release also includes a custom art print. Silverstein says each issue commissions 300 vinyl records.

Despite working with a Rolodex of traveling writers, Singles Club is a two-man operation that runs on the good will of the inner circle. Girlfriends help package and mail records, friends work an occasional merch booth. It’s a DIY assembly line that Feighan can relate to.

“It’s only me. I am just the guy,” Feighan says on the phone from his place in Los Angeles. Truth be told, I didn’t realize Monster Rally was just one guy, to say nothing of the bold auteur responsible for the album art that I think I’m on the phone with. For this project, the Cleveland-raised Feighan would send Silverstein emails with files to whittle down the right track. All of which were recorded in his home studio.

The operation is a tribute to the modern freelancer economy, one wherein isolated angst spawns standalone beauty and then you invest hours emailing online guardians. It’s often fruitless and a task that’s strong-armed into uncomfortable timestamps, but just the very act of tugging at the robe of controlling publishers is a welcome distraction to the things we do for money.

“I’ve recently gotten to the point where I’m working now for myself,” Feighan says, toasting the lack of a “terrible freelance gig that I hated” consuming purple blocks of time on a proverbial Google Calendar.

He runs an online business with his wife, however. And his life involves juggling creative enterprises, mostly music and graphic design.

“I get up and I email a bunch of people and then we package a ton of orders, go to the post office… Then I’m emailing bloggers about new songs,” Feighan says. “I’m never unhappy doing it. I’m always psyched that I get to be doing what I’m doing—but it never ends.”

It’s slightly more complicated for the Singles Club team. The guys compose every part in the orchestra, and that’s a sweaty proposition.

“I think Chris and I are both used to working jobs that require many hats,” Silverstein says. “We’re two people wholly interested with getting our hands dirty… We love the fact that we have to approach it from all angles at once.”

But that likewise means mixing reporting with public relations work—an inherent ethical no-no. Silverstein says the key is to outsource the feature writing by way of genre experts.

“I’ve written one of the larger pieces… beyond that we have been working with some other writers across the music journalism world,” he says.

In the grand scheme of the music business, that truce between long-form writing and promotion retains its integrity. Within this skeleton crew operation, there are taste-making editors, hired freelancers fishing out the narrative, and the audience tuning in because it trusts the selection process. There is one critical difference, however: The absence of major league public relations teams to expertly bolster the presentation.

In the age of the bedroom songwriter who can theoretically land in a golden inbox, the distribution channels are decks stacked against independent artists because it’s so easy for a wolf in sheep’s clothing (Bandcamp and SoundCloud pages) to bet on its own horse and rig the conversation. Feighan agrees, and though he’s tactful about not sharing war stories, he offers dignified resignation with respect to landing on the hype-driving music blogs: “It’s becoming increasingly hard to get ahold of those people… I made a mental choice a long time ago to not get discouraged by that.”

Singles Club’s vitality is its transparency. It’s not a label with a bottom line. It’s not a music blog compromised by big PR. For now at least, it’s a pair of fans centrally concerned with disseminating work from bands that they like. The proof is in the ridiculous extracurricular resources dedicated to making the ship float.

I ask Silverstein why the vinyl and not, like he’s graciously provided the Daily Dot, a shareable mix built to glide on modern social outlets. Vinyl is expensive, impractical, and a medium often co-opted by fetishists that exclude fans from the huddle by selling a more challenging—and thus authentic—user experience.

He says that it’s about indulging a have-and-hold desire for an artifact. A record may be aesthetically pleasing, sure, but it’s also akin to a smoked turkey in the middle of a family table: It’s a communal hub that is itself a standalone occasion.

Singles Club is likewise flying Feighan coast-to-coast so it can host a release concert on Friday. “It’s just so massive that music communities can be difficult to start or to maybe break into,” Silverstein says about New York City, a rent-is-too-damn-high cluster of islands that its leading paper of record recently compared to new-money, glass-house city Dubai.

I ask if he’s going to make sure these travels are rewarded with a lasting concert film that can live forever on Vimeo. But he doesn’t see the effort to criss-cross America and play in Eastern Standard Time as a gesture that the Internet needs to own.

“I’ve tried to do that a few times—get really geared up to do a live video—and it’s never really worked out. There’s a lot of 15-second Instagrams floating around out there, and that’s fine.

“For me, I’m just one guy using a sampler… It’s much better to be there than it is to watch me pushing buttons for 45 minutes.”

And that’s exactly the tangible sort of experience that Singles Club is all about.