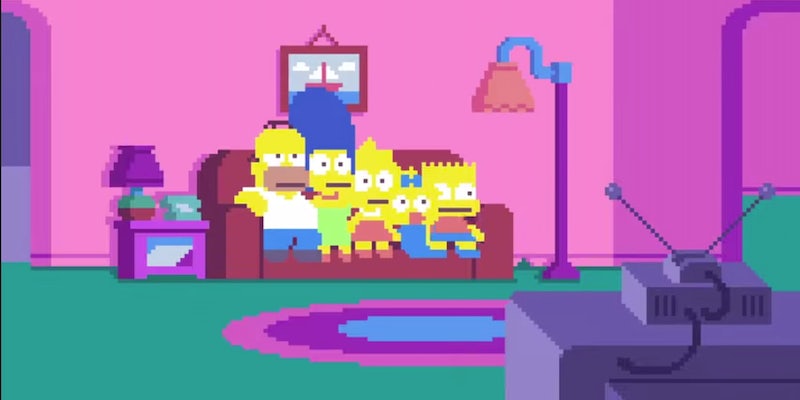 You need to watch this 16-bit, side-scrolling ‘Simpsons’ makeover

Superfans give 'The Simpsons' the ultimate pixelated makeover.

Thanks to 26 seasons on air and thousands of episodes in syndication, The Simpsons opening credits have easily becoming one of the most recognizable animated intros in the pantheon of pop culture. From Futurama tributes to bizarre sci-fi spoofs, America’s favorite animated family and its signature couch gag have plumbed just about every creative depth.

But sadly, no couch gag in the past 25 years has come close to achieving the creative genius a few fans were able to construct with only a few pixels. This 16-bit intro, complete with its own trippy electronic soundtrack, comes care of superfans and master animators Paul Robertson and Ivan Dixon.

The pixelated homage to Homer, Marge, Maggie, Bart, and Lisa is loaded with references to some of the franchise’s most notable episodes and only gets better with each passing second.

Someone get these guys in touch with Fox.