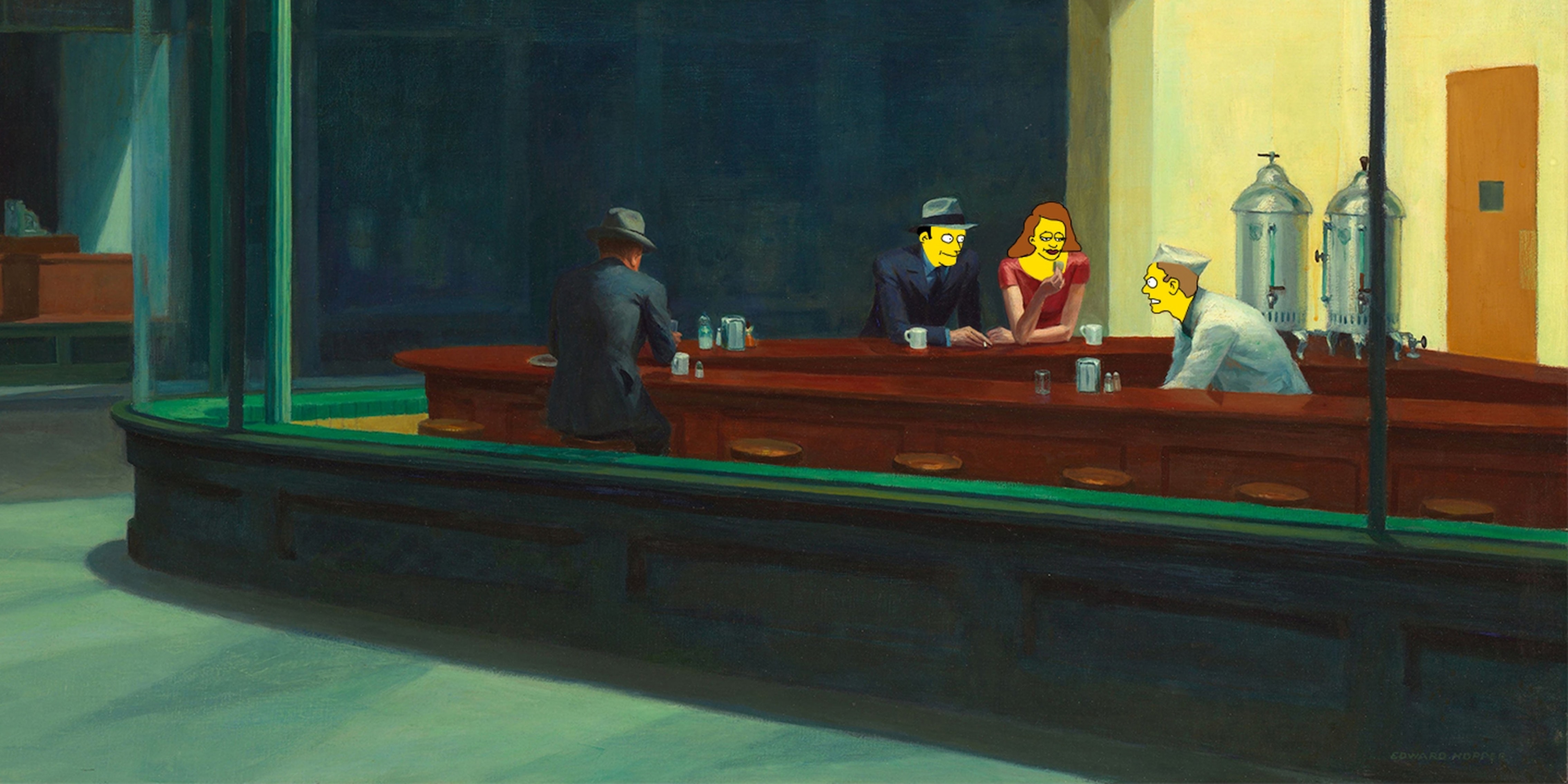 It’s not just in writing that the secretive John Swartzwelder has had his impact on the town of Springfield.

The writing room of The Simpsons has been the genesis of many notable comedy careers, with talent like Conan O’Brien escaping the cramped room where the world’s longest-running television animated series is written into life.

During the 1990s, there was often a figure in the smoky haze of the room, a Simpsons writer who has never appeared on an episode commentary (besides one unconfirmed incident), and has never done publicity for the show. His name is John Swartzwelder, and he is the genius behind 59 episodes of The Simpsons, far more than any other individual writer. But despite this impressive record, there are only a handful of photos of him, none official.

Swartzwelder, who worked on the series until the 15th season, is now an absurdist fiction writer, and he remains as reclusive as ever. Since the show’s sixth season, he was granted dispensation from having to attend writers’ meetings and was allowed to submit his work from home. It is said that the reason for Swartzwelder’s departure from the room itself was his habit of chain smoking, which he carried on even after a ban had come into place.

Separated from his fellow writers, the long-haired genius, according to Simpsonscreator Matt Groening in an episode’s DVD commentary, found a diner he liked, and would write from the same booth every day whilst drinking “copious amounts of coffee.” However, California soon banned smoking inside public places, and Swartzwelder found himself with nowhere to go. Instead of finding a new place to write, he simply purchased the booth, installed it in his home, and continued his work as if nothing had changed.

The diner booth personifies Swartzwelder’s style of writing. His scripts often feature classic American motifs, such as gangsters (he came up with the now infamous Fat Tony character), carnival workers, and Wild West movie tropes. His imprint is instantly recognisable in some of the greatest episodes in the show’s history, including “Krusty gets Kancelled,” which contained an “Eastern European Itchy and Scratchy” called Worker and Parasite, one of Matt Groening’s favourite moments from the series.

It would be hard to nail down the best of Swartzwelder’s work, but his first credited episode, entitled “Bart the General,” is widely regarded as the first “proper” Simpsons episode.

It’s not just in writing that the secretive Swartzwelder has had his impact on the town of Springfield. Due to his solitary nature, he often makes fleeting cameos as a mental patient or as a surprise witness called by inept attorney Lionel Hutz. If you blink, you will miss the homages, often written in by more recent writers seeking to honor one of their greatest predecessors.

While he’s most famous for his work on The Simpsons, Swartzwelder got his start in the industry on Saturday Night Live, another breeding ground for talented writers. He also apparently appeared in one episode, but attempts to find what may be the only video of the reclusive writer have been futile.

The one failure on his belt is a TV pilot turned one-off TV movie, Pistol Pete. The proposed show revolved around a goofy Wild West cowboy. In what is the only on-record statement from Swartzwelder, he remarked to a blogger that “Pistol Pete still makes me laugh, and [the actor] Stephen Kearney was terrific.” While not picked up by the networks, the spirit of the hopeful series lives on in his fiction.

Swartzwelder’s books are certainly far removed from mainstream literature, continuing his obsession with the America of the past and approaching it as absurdist fiction. Swartzwelder ends up with some strange stories. Each book has an almost identical cover: a plain-coloured background with the book’s title followed with “By the Writer of 59 Simpsons Episodes.” Some of the plots are truly absurd, and with titles such as The Time Machine Did It and The Fifty Foot Detective, it can only be expected. The website for his books features a strange black-and-white picture of a dilapidated house, with no further explanation. And as for contact details, there is only a PO Box listed, located in Chatsworth, Calif.

For a while, the very existence of Swartzwelder was debated, with a portion of the online fan community believing that he was, in fact, a pseudonym for collective writing. That would explain the large margin by which he leads the credited episodes rankings.

There is another, even more intriguing, theory that fans have come up with: John Swartzwelder is the inspiration for popular Parks and Recreation character Ron Swanson. The show’s co-creator Greg Daniels had previously worked as a writer and producer on The Simpsons. There is certainly a similarity: OtherSimpsons writers have called Swartzwelder a libertarian much like Swanson, and they both seem to enjoy old-fashioned American past times and a nice steak dinner. But despite the similarities between the pair, television producer Michael Schur has denied on Twitter that the character of Ron Swanson is based on John Swartzwelder.

@thatbilloakley Sadly, no. Swanson has no real-life referent. Plus, isn’t Swartzwelder like a Whig or something?

Only one reported audio recording of the man exists, and even its provenance is in doubt. During an audio commentary for The Simpsons episode “The Cartridge Family”, the writers discussing the show call a telephone number purportedly belonging to Swartzwelder. After a couple of minutes of conversation, the call is ended by the man on the end of the line, saying “Too bad this isn’t really John Swartzwelder, though.” After they hang up, Mike Scully mutters “I know he’s going to sue us.”

Many long-time Simpsons fans believe the show is now long past its prime, a prime that seems to coincide exactly with Swartzwelder’s departure. Since the end of the 15th season, there hasn’t been a single episode written by this isolated genius, and the animated series seems to be the worse for it.