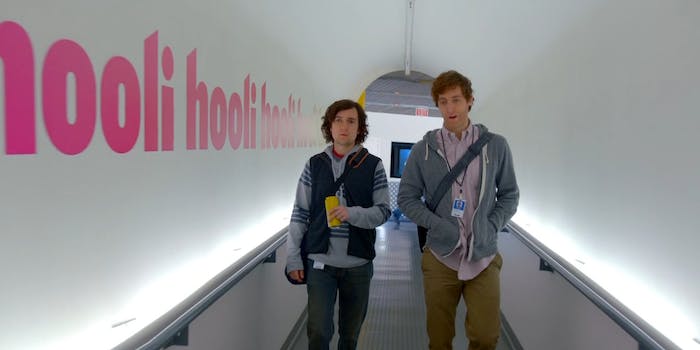 HBO’s ‘Silicon Valley’ is a sharp satire of tech culture

The premiere episode of Silicon Valley satirizes startup culture. Here’s hoping it gets some better female characters as the series progresses, though.

The opening scene of Silicon Valley’s pilot episode, “Minimum Viable Product,” does swift work world-building the money-flooded, dorky, pompous, slightly misogynistic off-kilter version of northern California’s technology hub. It begins with misdirection: For the first few seconds, viewers might think they’ve mistakenly flipped to the middle of a Kid Rock concert. The aging musician flings himself across a stage with flashing lights, fireworks and a giant American flag, energetically performing like he’s at The Gathering of the Juggalos or wherever it is Kid Rock normally performs these days.

But this is no juggalo gathering. It’s barely a concert—as the camera pans back, we see the sparse crowd is in the backyard of a mansion. They are subdued and utterly uninterested in the music, and clustered into gender-segregated groups of gangly men and bored-looking women. Later we see there are more party guests gathered around a video game than the live performance. “Fuck these people,” Kid says. That might as well be the thesis for this show, which displays sympathy for its protagonist but has no mercy for the tech companies and culture it dissects.


We meet our hero, meek programmer Richard Hendrix (Thomas Middleditch) as he attempts to navigate this sad, weird party; he’s flanked by his fellow nerds Big Head (Josh Brener) and Dinesh (Kumail Nanjani, nailing every line). Even though Richard works at Hooli (a very, very thinly fictionalized version of Google), he lives rent-free with these men at a tech incubator run by Erlich (T.J. Miller), a gloriously gross wannabe-Lebowski who sold his company (Aviato, which he makes sure to pronounce with an inexplicable Spanish accent and mention at every opportunity) and uses the profit to host the motley gaggle of guys with hope one of them will churn out an even better startup idea.

Rounded out by Gilfoyle (Martin Starr), a self-described “LaVayan Satanist with some theistic tendencies,” the hoodie-wearing programmer tribe has about 79000 percent less swagger than its Entourage counterparts, but because they’re both HBO comedies with contemporary California settings and a group of young male leads, I feel obligated to point out that Big Head is totally the Turtle. And now I will never compare Silicon Valley to Entourage again since they fall on opposite ends of the smarm/snark binary and also, no one should talk about Entourage ever.

In the pilot, at least, Richard’s milquetoast personality gets in the way of feeling invested in his emerging dilemma, but even if Middleditch’s character continues to be a goober, the supporting cast may be strong enough to compensate, although the lack of female characters will be a problem if they don’t introduce at least a few tech players with two X chromosomes.

The party’s host (we learn he sold his company to Google for $200 million) jumps onstage with Kid Rock and starts spewing self-congratulatory platitudes. “We’re making the world a better place through constructing elegant hierarchies for maximum code reuse and extensibility!” he says. Would you be surprised if I was quoting that line from any number of different tech company manifestos or transcripts from back-patting conference round tables? It’s eerily similar to some of the grandstanding hogwash startup founders and venture capitalists spew on the regular. Like the spot-on set design for the glossy-chic Hooli campus, Silicon Valley’s dialogue barely has to veer from reality to poke fun at its puffed-up subject. “Oh god. The marketing team is having another bike meeting… douchebags,” Big Head says as he and Richard go to work at their lower-tier Hooli day jobs. If that exact sentence hasn’t been uttered on Google’s campus, I’ll eat my hat.

Silicon Valley comes from Mike Judge, who is responsible for one of the most dreadfully accurate on-screen depictions of corporate culture: Cult-classic film Office Space (1999). Judge briefly worked for a Silicon Valley startup and reportedly quit because he loathed the company’s culture, and contempt for the hollow do-gooderism that cloaks the fundamentally acquisitional nature of large tech companies is on full display here.

Quivering Richard’s story is propelled forward by a deux ex software design: turns out he accidentally engineered a tech marvel. Buried inside his “Google for music” app, Pied Piper, there’s a compression algorithm that becomes the subject of a bidding war between two viciously-drawn tech executives. Richard must choose between a $10 million offer from Hooli’s founder, Gavin Belson (Matt Ross) or an investment from rival tech magnate Peter Gregory that will allow him to keep control of Pied Piper. Belson’s delusional Hooli leader has a cult of personality, an unnerving stare, and a glorious lack of self-awareness.

The scene introducing Gregory (Christopher Evan Welch) is this episode’s sharpest: He’s railing against attending college in a TED Talk (an obvious jab at PayPal founder Peter Thiel, who has a similarly zealous crusade against higher education in real life). Richard and Big Head go to try and pitch Pied Piper to Gregory; they get his ear for a moment after threatening to enroll. “DON’T GO BACK TO COLLEGE!” Gregory roars. It’s funny. Welch died last December, so it’s unclear how the show will handle writing his character out, which is unfortunate for many reasons; he’s terrific here. And Gregory’s excessively narrow smart car is one of the episode’s funniest sight gags.

The lone female character, Gregory’s head of operations, Monica, is played by Amanda Crew. She seems to be set up as Richard’s love interest, even though he’s about as appealing as a piece of soggy toast, and I hope they do something more with her character and bring in a few more women. Yes, startup culture is dominated by men. But Silicon Valley’s satire is best when it is sly, and there’s no need for such a hyperbolic gender segregation; even Girls has fleshed-out male characters. It’s appropriate that even sweet-seeming characters like Big Head are clearly misogynistic; on the Hooli bus, he casually shit-talks an older lady riding a bike, and he’s responsible for an app called “Nip Alert.” From what we’ve seen time and time again, that’s not a leap from brogrammer culture at all. But Silicon Valley will be a better show if it can temper its satirical portrayal of sexism in tech by spending time with characters that play women in the world.

Silicon Valley’s pilot establishes the world it is set in well, but I’m hoping Richard becomes less of a weenie as the series progresses, and that the gender ratio evens itself out.