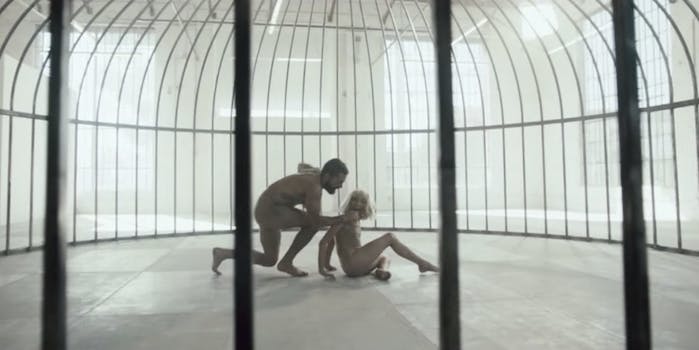 It all started with Dance Moms.

If you were mesmerized by the small blonde-wigged dancer who vogued, twirled, and stomped her way through the video for Sia’s “Chandelier” last year, you likely rejoiced at the release of “Elastic Heart” earlier this month.

The video features Maddie Ziegler, the same captivating dancer who starred in the critically acclaimed “Chandelier” video, alongside actor Shia LaBeouf. The stark, contrasting figures of a small-framed, lithe Ziegler and a lumbering, brooding LaBeouf wrestle, chase, and comfort each other while encircled by a cage-like dome. So what’s it all about?

YouTube channel DanceOn has released a fascinating look at the story behind the video, and it may make you see the enigmatic duet in a new light. The video, an episode of Dance On series The Edge, includes interviews with Sia (obscured by a bunch of bananas), Ziegler, and LaBeouf, as well as choreographer Ryan Heffington and co-director Daniel Askill.

Sia explains that she found Ziegler like many a reality TV watcher: “I was watching Dance Moms.” Although the Lifetime series centers around glitzy dance competitions and a campy, tough-as-nails dance teacher, Sia admits that Ziegler’s performance on the show moved her to tears.

“I thought if I can cry watching a kid do that kind of choreography that’s highly commercial, then she must have something special.”

Sia also says she was thrilled to bring LaBeouf on board for the second video in what will be a trilogy of videos featuring Ziegler: “I’m one of his greatest fans; he’s my favorite actor.” LaBeouf and Sia worked together to create the concept of Ziegler and LaBeouf embodying the same space to represent two parts of one self.

For more of Ziegler’s dynamic dancing, you can make like Sia and binge-watch Dance Moms, which is currently streaming on Netflix.