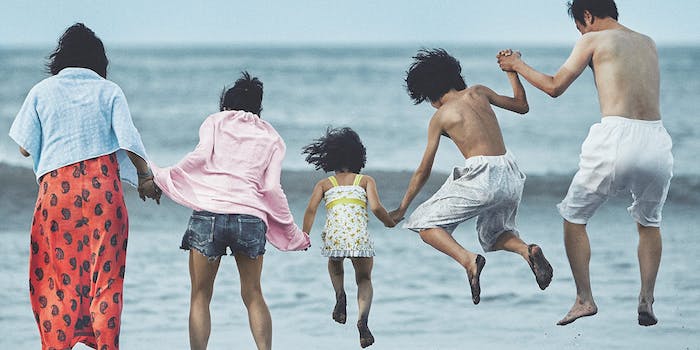 ‘Shoplifters’ is a quiet, astounding look at the connections we share

Shoplifters wears its heart on its sleeve. The multigenerational family (and the family they chose) at the center of Hirokazu Kore-eda’s intimate film makes many morally questionable decisions, but the film itself never judges the characters for it. Instead, Shoplifters is a thoughtful, gut-wrenching, and often damning look at the society that helped shape them.

RELEASE DATE: 2/12/2019
DIRECTOR: Hirokazu Kore-eda
RELEASE: DVD/Digital
A poverty-stricken family that shoplifts to get by takes a young girl their home after seeing her outside in the cold.

The Shibatas live on the outskirts of Tokyo, secretly occupying a house owned by Hatsue, an old woman who lives off her late husband’s pension. Whenever someone stops by to check on Hatsue, everyone else scatters. The Shibatas often have to resort to shoplifting from grocery stores to eat, which Osamu (a laborer who loses his job after getting injured onsite) and Shota (the young boy Osamu and his wife Nobuyo take in) accomplish through a set of hand signals. They even have a moral code that dictates what they can and cannot steal: It’s OK to take from stores because “whatever’s in a store doesn’t belong to anyone.” There’s an almost infectious playfulness to Osamu and Shota’s misdeeds.

The house is cramped, and the family—even before Osamu’s unemployment—is barely scraping by. But after a successful haul at the grocery store, Osamu and Shota discover Yuri, a 5-year-old girl left outside in the cold. They bring her home, if only so she has a place to stay for the night. But when they see signs of abuse and neglect, they let her stay.

Is their choice to keep Yuri still a bad one if it’s done for noble reasons?  The characters in Shoplifters continually grapple with this question as Yuri becomes part of their family, and even once the system that would hypothetically help kids like Shota and Yuri continues to fail them. The more the Shibatas decipher about Yuri’s past, the tighter they hold onto her, even when the police get involved to return her home.

In some of Shoplifters’ quieter moments, the family’s bonds are astounding to behold. The snippets of these relationships—what we see and what goes unsaid—and the house they inhabit paint a more vivid picture of what they’ve gone through than any amount of exposition could. A tender moment between Osamu and Nobuyo captures how far their love extends for one another. Even without their past hanging over their heads, their relationship has had to evolve beyond its base level.

The Shibatas find aspects of themselves in Yuri—particularly Nobuyo, who shares some of Yuri’s scars and burns—and attempt to do right by her. They begin to discover new parts of her, as she also begins to heal. But by letting Yuri into the family, they’re slowly getting her caught up in their schemes. The conundrum worsens as their crimes escalate.

The family’s moments of pure joy, such as a day trip to the beach, almost make you forget their dire situation. They’ve stuck together despite everything, a family that somehow found each other and chose each other. But just as you start to believe this yourself, the film delivers one gut punch after another, guaranteeing that Shoplifters will sit with you long after you finish watching it. Like many of the characters caught in the proverbial crossfire, you’re left to pick up the pieces and oddities hidden just beneath the surface. Many of these pieces were always there, but because of Kore-eda’s touch, you hardly notice them until it’s too late.

By the time that happens, Shoplifters will have likely already won you over. What would be a triumphant moment in many other films turns out to be one of crushing devastation. The world that these characters inhabit is cold, relentlessly cruel, and full of judgment—a far cry from the warmth the Shibatas offer as they parse through their experiences and the stories they were told in order to find the truth. Yet even amid the bittersweet resolutions, the film still offers glimmers of hope: a fond memory or the power of a step forward. Despite how things turn out for the family, their connection was always real—and you don’t have to be bonded by blood for it to be that way.

Shoplifters is now available to rent and buy.