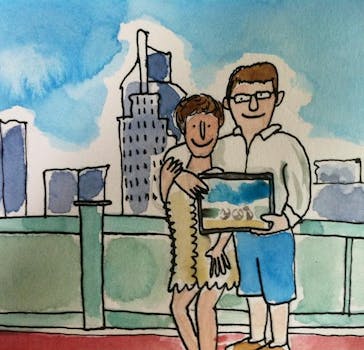 Thanks to a romantic painting from the popular novelty account, redditor Mike Freeman's proposal to his girlfriend was anything but "shitty."

Reddit user bigmur72, real name Mike Freeman, has been planning on asking his girlfriend, Kimberly, to marry him for quite awhile. Like most guys, he wanted the moment to be extra special.

So Mike recruited the help of popular Reddit novelty account shitty_watercolour, and had him turn a photo of the couple on their bicycles into a work of art.

To celebrate the new painting, Mike told Kimberly that he wanted to get photos taken of them holding the painting at the very same location depicted in the art. While the couple posed, he popped the question.

“I had this whole thing planned out in my head as to what I’d say. Then, in the heat of the moment, forgot it ALL!!!” Mike wrote on Reddit. “I got all choked up.”

He posted the photo album of the proposal on Reddit, where it has collected more than 500 comments congratulating the new couple and recognizing shitty_watercolour for his good work.

“I genuinely want the best for shitty_watercolour and it makes me happy that you were aided by his craft,” commented eleyeveyein. “Congrats and super upvote for a bigger guy landing a hot girl. I don’t think people realize how much sexy women feel comforted by big teddy bears.”

Mike met Kimberly on July 11, 2010, after he accidentally paid his rent four times online. He rushed to the bank to remedy the problem and was helped by his future fiancée. He immediately fell head over heels. He ended up visiting the bank regularly from then on, sometimes letting other customers cut him in line just so he could be helped by her.

“After a few trips to the bank (I went a lot as I was self employed, so I’d get checks every other day or so) I decided to ‘stalk’ her on facebook,” he wrote. “I added her as a friend and she added me back in about 20 seconds!”

Months went by and the two went out a few times as friends. After a handful of failed attempts at landing a kiss, and some successful hand-holding sessions, the couple finally started dating a year after they first met.

“Within the first week I was madly in love and told her so,” he wrote. “It was pretty much just a week or so before she started staying over at my place. Within three months, we were pretty head over heels about one another.”

In celebration of their engagement, shitty_watercolour made a handful of meta-paintings to remember the proposal (and Reddit success).

“Honestly, I’m shocked,” Mike told the Daily Dot. “I couldn’t believe that near as many people cared about this. I figured there’d be a few comments, maybe some well wishers, and a few people telling me to look into a good diet. What I found was Reddit’s best coming out.”