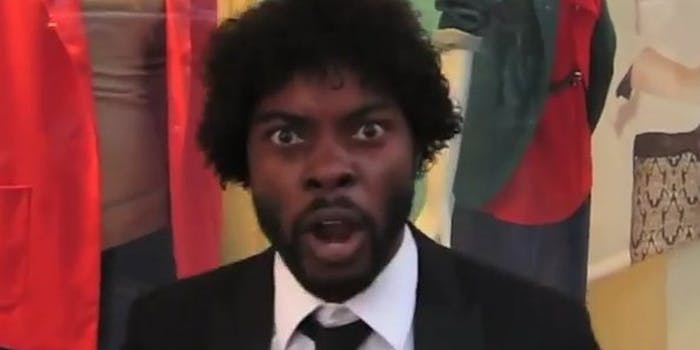 This meme may be old, but one YouTuber proves it ain't over yet.

A new spin on the sometimes unfunny meme has done something remarkable: it’s actually hilarious.

“Shit Samuel L. Jackson Says” is largely just a dude quoting some of Jackson’s lines from his movies to strangers while dressed like Jules Winnfield from Pulp Fiction. However, he pulls it off remarkably well.

He nails Jackson’s intonations for the most part, carries himself with the same swagger and gets the actor’s wild-eyed look spot on. There are some terrific reactions as he spouts lines to passers-by on the street, gonzo-style. The movie quotes work a lot better than his skits with the wax statues and his computer, though it’s a funny video all the same.

Samuel L. Jackson impersonations and telling puppies to “bitch, be cool!” is a potent combination. As such, the clip’s gained a lot of attention on Reddit today.

“I was fucking sick of these “Shit somebody says” but then this one happened.” deerchild commented in a Reddit thread.

“One of the few of this meme that I enjoyed. Too bad he started sounding like Chris Rock toward the end,” commented chernickov.

ScruffyPige0n wins the thread though: “I bet he hasn’t even seen Pulp Fiction and this is just how this man addresses the public.”

There is one thing YouTuber MILLHITSdotcom got wrong though: no-one is better than Morgan Freeman.