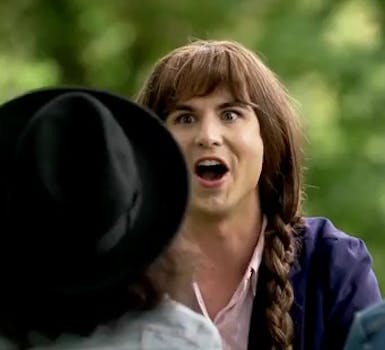 Oh. My. God. Shut up! Hollywood is so over. The Web is, like, awesome.

The Twiter account, a Daily Dot favorite, is just one of many girl-problem chroniclers on the microblogging site. Everyone is guilty of saying the shit this Twitter account says girls say at some point or another. It’s funny because it’s, like, so true, guys.

It follows in the footsteps of Shit My Dad Says, a Twitter account which made the leap to television. But that show was cancelled earlier this year. Perhaps Twitter to YouTube will prove a more natural leap.

While the tweets are skort-slappingly hilarious on their own, actor Graydon Sheppard, in a wig all dolled up with red lipstick, ups the humor with his delivery of common phrases like “Could you pass me that blanket?” and “Ugh. I hate trying on clothes.”

The first episode of the eponymous series has already gathered 200 comments, and more than 3,000 likes since being uploaded five hours ago. (The view count, as so often is the case with hot new videos, is stuck at 303 because of a YouTube bug.)

“DEAD ON. coming from a girl” wrote RainAngel111.

YouTubers have already taken to begging for more episodes, and subscriptions to the Shitgirlssay YouTube channel—which was created in October, but hasn’t been active until now—have jumped to 1,914 as of publication time, and are racing upwards.

It may not be a Hollywood-sized audience yet, but it’s an excellent YouTube debut—and it shows that the Web is more and more of a destination for both creative talent and fans.