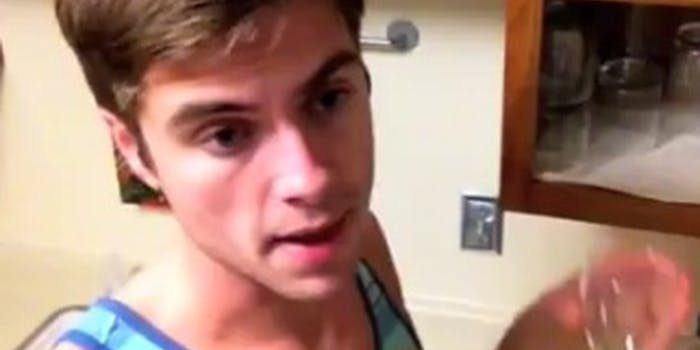 Actor-vlogger-writer Jeffery Self puts the "poof" in "spoof."

Following in the footsteps of the novelty Twitter account @ShitGirlsSay, which leapt to YouTube fame earlier this week in a fantastically successful video, “Shit Gay Guys Say” follows the same formula. But way gayer.

In 74 seconds, Jeffrey Self, an actor and vlogger who grew up in Rome, Georgia, but now lives in Los Angeles, machine-guns mouthfuls of fabulous phrases like “Which is why I’ll never go to Hamburger Mary’s again on a Monday” and “Do you guys have any wigs?”

In fact, “Shit Girls Say” prompted him to make the video, Self told the Daily Dot in an email.

“It was brilliant and hilarious and perfect,” he said. “Kyle Humphrey and Graydon Sheppard, who created that Twitter account and the new video series, did SUCH an amazing job and I felt really inspired to follow in their footsteps.”

Self came up with the phrases himself, with the help of his friends and boyfriend Patrick McDonald.

Some of the phrases are pretty specific to him. He could have called it “Shit Jeffery Self Says,” he noted, “but something tells me a lot less people would care about that.”

YouTube commenters, when not spewing homophobic comments, seemed to enjoy the parody.

But we think he was made for YouTube, girl. He’s now trying to launch a new Web series about his pop-culture obsessions.