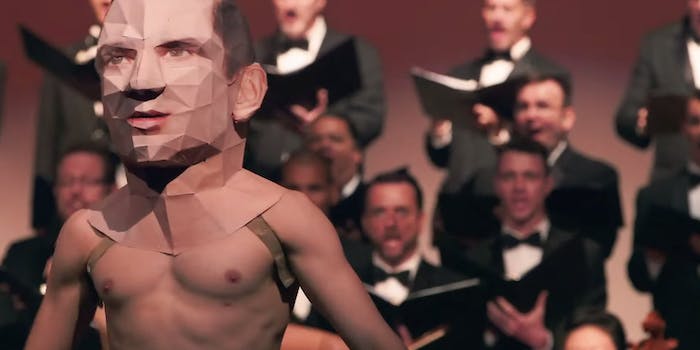 Like a dog returning to its vomit, the creators of viral Internet hits cannot help but try to recreate past successes. Most of the time this is a terrible idea, but this new Shia LaBeouf video is a rare exception.

Rob Cantor’s surreal comedy song Shia LaBeouf won hearts and minds back in 2012 with its deadpan narration of a horror story about “actual cannibal” Shia LaBeouf. Somehow the song caught on, and it continued to spread online as the real (and hopefully non-cannibalistic) LaBeouf began behaving more and more strangely in his public life.

Shia LaBeouf (song, not actor) captured the public’s imagination in the way that Shia LaBeouf (actor, not song) had not been able to manage in years. Soon, Tumblr was overflowing with parody videos, the song had its own Know Your Meme page, and the Washington Post was publishing a mini-profile on songwriter Rob Cantor, who is better known for his work with the band Tally Hall. Now, Cantor is back with an extended Shia LaBeouf video adaptation that can only be described as epic.

Acrobats. Interpretive dance. Giant papercraft Shia LaBeouf heads. A children’s choir. And, of course, all this is accompanied by the eerie tones of Cantor’s radio announcer voice as he narrates your blood-soaked fight with Actual Cannibal Shia LaBeouf. This video is preposterously overblown in a way that is absolutely, 100 percent appropriate for the topic at hand.

Naturally, the performance ends with an obligatory cameo from the real Shia LaBeouf. At last, he has inspired the kind of performance art weirdness that he himself has been trying so hard to create in real life, for years.