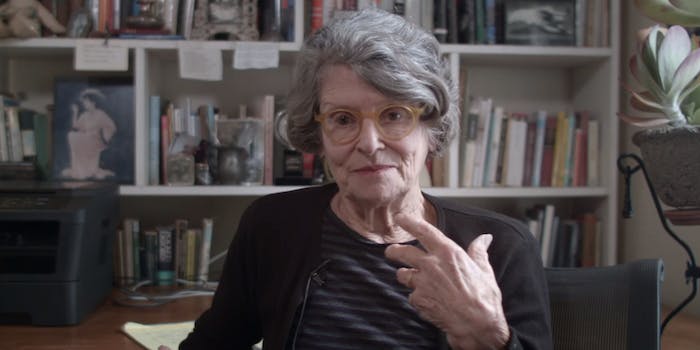 Can the YouTube generation make for great character actors?

In a culture where fame can be fleeting and almost too easy, one new documentary shows what happens when one of the elder stateswomen of the theater interacts with the YouTube generation.

She’s the Best Thing in It follows Tony Award–winner Mary Louise Wilson as she travels home to reconnect to her past and to try something new in teaching college students. Wilson, at 79, had never taught before, but she weaved a career on stage and screen that has included such works as Nebraska, Grey Gardens, The Sopranos, and many more. She says she never worried about the students when she taught; she worried about herself.

“How do I say what it is that I do?” wondered Wilson at South by Southwest, where the film premiered. She turned to the teaching of Sandy Meisner, with whom she’d studied, as a template for her class. The technique focuses on instincts, with some exercises rooted in repetition so as to reduce words to insignificance and put focus on reaction. It was a new approach for her students, and the film watches them struggle to tap into the emotions and mindsets Wilson asks of them.

“At first they just seemed totally like zombies, and it was frightening,” she said. “There were little flickers of things, but it was hard. Eventually they warmed to it.”

While most of the students cite fame and fortune in their quest for the stage, what they learn over the course of the film is that desirable celebrity status is not the lot of most actors, who go through years of ups and downs before making a dent. The film itself is a teaching tool, with interviews with celebrated character actresses like Frances McDormand, Melissa Leo, and Tyne Daly mixed in with footage of Wilson teaching and introspective sections in which Wilson connects her own life story to the struggles of finding emotional truth as a performer. As the students begin to come into their own, they realize the excitement of fame is no match for the work of theater.

For filmmaker Ron Nyswaner, the film is a tribute to character actors, specifically female ones, who don’t always get their due.

“It’s not a documentary that’s going to make you feel guilty because you’re not recycling,” he laughed. “You don’t have to become a vegan after watching this documentary. It’s very inspiring. A couple older women actresses who came to the screening in L.A. came up after and said, ‘Thank you for honoring what we do for a living.’ I’m very proud of that. I love actors.

“How do they do that? How do you get up in a Broadway theater and pretend, truthfully, to be someone they’re not?”

After working with young actors of the “YouTube generation,” Wilson is hopeful for the future of the craft. She noted a handful of students from the film as standouts, as well as others she’s worked with on the professional stage. She’s back on Broadway now, starring in On the Twentieth Century. She remains open to heading back to the classroom, but with a caveat: