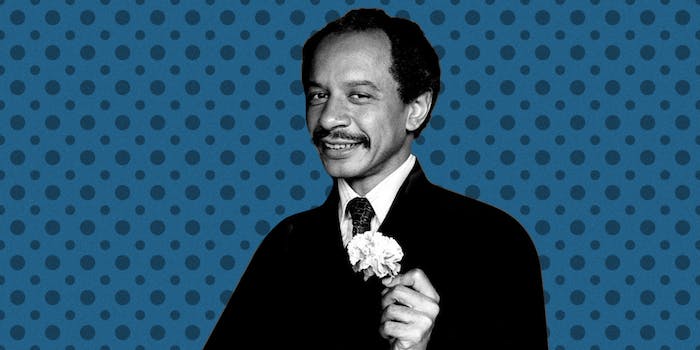 Yet another celeb stricken with Second Facebook Death Syndrome.

“Sherman Hemsley is moving on up… to heaven” is what I would have said if he died today. But he didn’t die today. He died three years ago.

The fact that the late actor, known for playing George Jefferson in the TV series The Jeffersons,  passed away in July 2012 didn’t stop Facebook and Twitter from killing him one more time.

On Monday, a BET article announcing Hemsley’s death made the rounds on Facebook, breaking the hearts of fans first hearing the story.

The story continued to show up on Twitter on Tuesday.

Awwwww he's now in that deluxe apartment in the sky with Weezie RIP http://t.co/T4NisBOfTP

Folks who took a second to either read the date on the article—or, you know, remember—didn’t waste any time debunking their gullible social media counterparts.

The Jeffersons star is only the most recent in a long line of celebrities with Second Facebook Death Syndrome, including Rue McClanahan, Joe Cocker, and Dennis Hopper.

Hemsley was found dead in his El Paso, Texas, home on July 24, 2012, after succumbing to lung cancer. According to the Hollywood Reporter, Hemsley had named his business manager and “beloved partner” Flora Enchinton Bernal as sole beneficiary of his estate a month before his death. However, the medical examiner located Richard Thornton, who claimed to have the same father as the actor. This resulted in a four-month legal dispute between Bernal and Thornton over where to bury Hemsley’s remains. The courts ruled in favor of Bernal, and Hemsley was ultimately buried in El Paso.

Sherman Hemsley is at rest, and he has been for three years. But when you read about Richard Attenborough’s death next month, remember it happened last year.